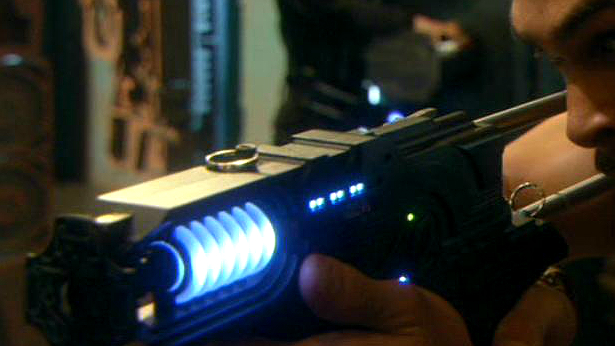 Energy weapon designed specifically to combat human-form Replicators. The A.R.G. emits a directional energy beam designed to disrupt the kiron pathway connections between nanites that make up a Replicator. A single shot will eliminate a Replicator, causing the enemy target to break down into its composite parts.

The handheld device, also known as an "A.R.W." (anti-Replicator weapon), is a more portable cousin of the Replicator disruptor, affecting the molecular bonds of blocks in the same way. It is based on Ancient knowledge acquired in the Milky Way Galaxy.

The Return, Part 1 - Colonel Carter issues the first series of anti-Replicator weapons to fight the Asurans. The devices are fast tracked into service when Colonel Sheppard leads an impromptu commando team back into the Pegasus Galaxy.
The Return, Part 2 - Sheppard's team uses A.R.G.s to retake Atlantis for the Replicators.