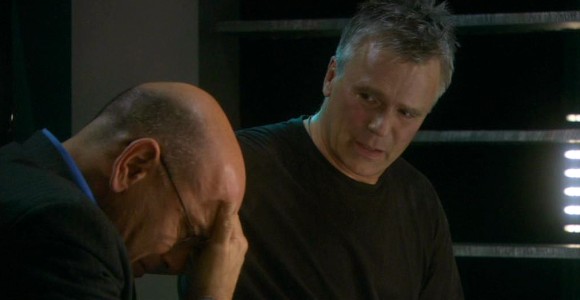 The Atlantis team goes against orders to try and save Atlantis from Replicator control – and to rescue General O'Neill and Richard Woolsey, who are trapped in the occupied city.

The Asurans, a race of powerful artificial lifeforms who were created by the Ancients thousands of years ago and who the team first met a few months ago ("Progeny," have conquered Atlantis. The Asurans are made up of trillions of microscopic nanites, and their abilities lead the team to believe that they are the original technology on which the human-form Replicators were later based (SG-1: "Unnatural Selection").

To help fight their new enemy, the Atlantis team calls in one person most up to the task: Major General Jack O'Neill, who has dealt with the Replicators in our galaxy many times. But when the Asurans take control of the city of Atlantis, O'Neill and Richard Woolsey find themselves captives.

John Sheppard, Elizabeth Weir, Rodney McKay, and the rest of the team attempt to come up with a rescue plan. Part of their plan is to reprogram Niam, an Asuran Replicator who was sympathetic to the team at their last encounter. McKay, of course, thinks he's up to the job.