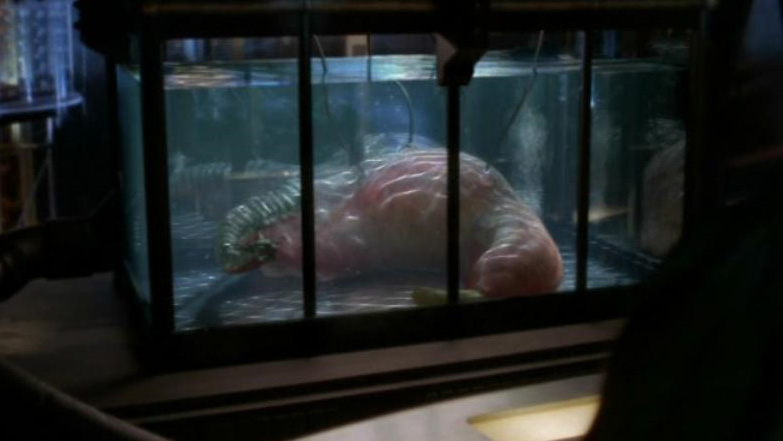 Mother of Goa'uld symbiotes, and mate to powerful Goa'uld rulers. Queens are quite rare, and are capable of spawning numerous larval Goa'uld -- called "prim'tah" -- in each cycle. The queen first requires a genetic sample (often procured sexually, for those queens that have taken host bodies) from the symbiotes' intended host species to ensure compatability. The queen can spawn regardless of whether or not it has taken a host.

While the development of new symbiotes usually involves passing on the Goa'uld genetic memory to its offspring, the queen may choose not to do so -- rendering the symbiotes "blank slates" that are more susceptible to command and domination, rather than thirsting for power and worship of their own.

Stargate Command's first encounter with a queen was with Hathor, who tried to take over the base by seducing the men. She was stopped by a team led by Samantha Carter, Janet Fraiser, and Teal'c.

Children of the Gods - Apophis searches the galaxy for a new host for his queen, Amonet -- who finally chooses Sha're, wife of Daniel Jackson.
Hathor - The Goa'uld queen Hathor is released from her sarcophagus imprisonment on Earth, and tries to take over the S.G.C. and spawn new Goa'uld offspring.
Cure - Egeria, the Tok'ra queen believed to have been killed by Ra, is discovered alive on the planet Pangar.
Evolution, Part 2 - Sam, Teal'c and Jacob find a Goa'uld queen in league with Anubis, spawning Goa'uld symbiotes without passing on the Goa'uld genetic knowledge -- perfect for Anubis's super-soldiers. The team destroys her before she can make more.