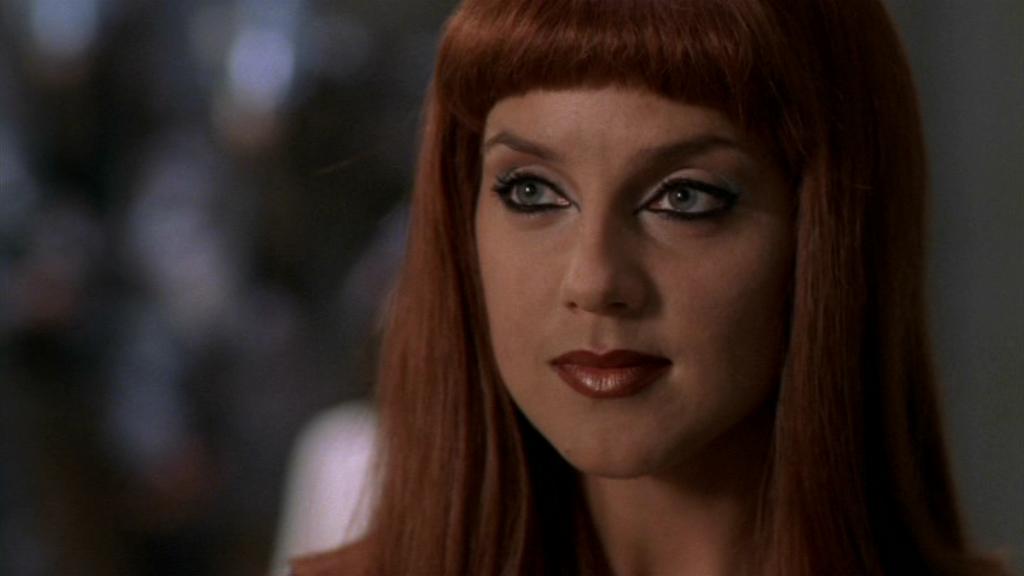 The daughter and bride of Ra, Hathor was a Goa'uld queen imprisoned in a sarcophagus in South America for thousands of years. In 1997, she was discovered by a pair of archaeologists, whom she killed before heading for the Stargate -- sensing its hidden location deep within Cheyenne Mountain. She has the ability to breathe an organism that renders men highly susceptible to her suggestion and "drunk" with her beauty -- but the base's women remained unaffected.

After her attempts to take over the S.G.C. and use its personnel as her new Jaffa (servants, warriors and incubators for her a new race of Goa'uld larva she created) was thwarted, Hathor escaped through the gate and continued to build a new army. She enlisted horus and serpent guards, as well as other Goa'uld, luring them from the remote outposts of various System Lords. Hathor's intention was to quietly gather her forces before the System Lords even knew she had been freed from her prison on Earth, in order to move against them.

In 1999, Hathor kidnapped Jack O'Neill, Daniel Jackson, and Samantha Carter and brought them to a replica of the S.G.C. facility, attempting to convince them that they were some 80 years in the future. Her goals were to probe their memories to learn as much about the System Lords as possible (she'd been "out of the loop" for a few thousand years), so that she might plot against them. She learned about the existence of the Asgard before being discovered, and wished to make an alliance with them.

Hathor also possessed stealth technology, allowing her to become completely invisible. She is currently believed to be dead, after Colonel O'Neill tossed her into a cryogenic freezing chamber (without the ever-important cryogenic freezing unit around her).

Hathor was the mother of Heru'ur, a powerful Goa'uld System Lord who was destroyed by the Goa'uld Apophis a year and a half later. His father was Ra.

Hathor - Hathor is set free from a sarcophagus on Earth, and uses an intoxicating organism to seduce Daniel and take control of the S.G.C.
Thor's Chariot - Teal'c informs Colonel O'Neill that the Goa'uld Heru'ur is the son of Ra and Hathor.
Out of Mind - Quietly gathering her forces from rival Goa'uld, Hathor captures O'Neill, Carter and Jackson, and threatens to make one of them a host.
Into the Fire - The S.G.C. finds Hathor's planet and rescues SG-1. O'Neill is saved from Goa'uld implantation by a Tok'ra infiltrator and he then kills the Goa'uld queen Hathor.