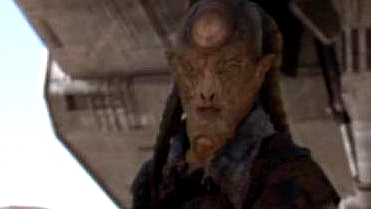 Humanoid alien trader, an associate of the Lucian Alliance and the partner of Tenat. He and Tenat arrived on an uninhabited planet to trade with Vala Mal Doran, but instead of obtaining the Earth ship Prometheus both men were shot with a zat'ni'katel by Daniel Jackson.

Less than a year later Jup was responsible for taking Daniel and Vala back to his cargo ship. He was not aware that the handcuffs they were bound with were rigged to be easily removed, and after he locked them away he soon found himself rendered unconscious by the pair, and his cargo ship stolen.

Prometheus Unbound - Jup and Tenat attempt to trade a case of weapons-grade naquadah to Vala Mal Doran, but Daniel (a.k.a. "Hans Olo") emerges from the ship instead.
The Ties That Bind - Jup and Tenat plan to double-cross Cam Mitchell for Daniel and Vala, but wind up losing yet another item -- their cargo ship.