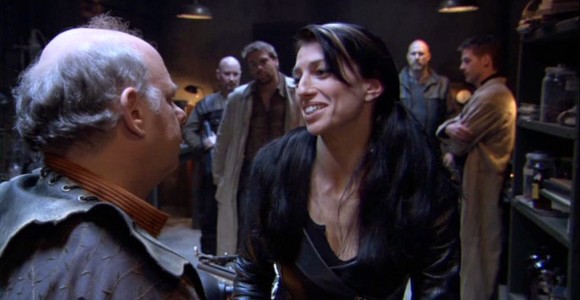 Daniel Jackson ensures that Vala Mal Doran is thoroughly searched before departing Earth, and low and behold, she tries to make off with a priceless artifact – twice. But about an hour after she has left, Daniel collapses again. He regains consciousness only to find she has returned, and that there is a more permanent link than they believed.

Once the kor mak were removed everything should have returned to normal, but Dr. Lam believes that since they used the bracelets in conjunction with an Ancient long-range communications device, they may have warped the after-effects into forming a more permanent bond. As Dr. Lee runs tests Daniel finally gets Vala to admit that she knows someone who might know of a way to sever the connection: the very person she stole the bracelets from.

Mitchell and Daniel meet Arlos, a former lover of Vala from whom she stole the bracelets. They explain the situation to them, and he says he might be able to sever the connection – but only if Vala is brought to him. Fearful that he might be planning to kill her he assures them that this is not the case.

Vala is brought to Arlos where he demands the return of his mother's necklace (another item she stole), or he will not attempt to sever the connection. SG-1 agrees to track it down. This brings them to another world to meet another of Vala's associates, a Jaffa named Inago. He insists he will only return the necklace if Vala returns a Tel'tak's power coil.

This leads them to another planet where the team travels to a shrine where monks still worship the god Grannus. Another of Vala's associates, Caius, is hiding out as a monk, but he wants to leave. For the power coil, Vala must return his cargo ship – the very one he had – not a replacement. Unfortunately, the ship is now being used by the Lucian Alliance, particularly another of Vala's former associates, Tenat. Getting away with it scot-free would be impossible.

Three days later General Landry, Vala, Daniel and Teal'c (who has returned from Dakara for testimony) travel to Washington D.C. in the hopes of convincing the chairman of the appropriations committee to not slash the S.G.C.'s budget. He believes in the possibility that Daniel and Vala were under a hallucination when they went to "another galaxy" inside their own minds. After Vala points a finger at the inadequacy of Senator Fisher's "manhood," the group returns to Stargate Command and Landry informs Mitchell that he now has no choice: Vala must be gone, so he'll have to find a way to deal with the Alliance. Their warnings have also gone unheeded, and the program's budget has been cut by 70 percent.

Teal'c joins the unit to a remote planet where they have agreed to meet Tenat. In exchange for Vala and Daniel (who was responsible for a loss of weapons-grade naquadah ["Prometheus Unbound"], bounty hunter "Cam Mitchell" and his Jaffa associate will earn a new case. As Tenat holds Mitchell and Teal'c at gunpoint, Jup takes the handcuffed Vala and Daniel to the cargo ship. As they suspected, there is no box of naquadah in the hold, and Jup locks them in the back. Vala uncuffs them and Daniel begins work on the door.

But the Lucian Alliance has arrived. Vala activates the modifications to the Tel'tak to generate four uncloaking Al'kesh and a pulse wave, enough to get them into hyperspace and away from the threat.

The cargo ship is returned to Caius, the power coil to Inago, and the necklace to Arlos, who reveals that he has no way to counteract the effects of the bonding. But his guess is that it will eventually wear off itself. General Landry is understandably upset, but at least he has some good news. The current budget will be cut, but they now have the support of the international committee – as long as they will be able to assign a civilian to the S.G.C. to monitor all expenditures and have a say in decisions.

SG-1 gathers in the Gate Room to see Teal'c back to Dakara, but Mitchell is certain that they'll be seeing him again soon.