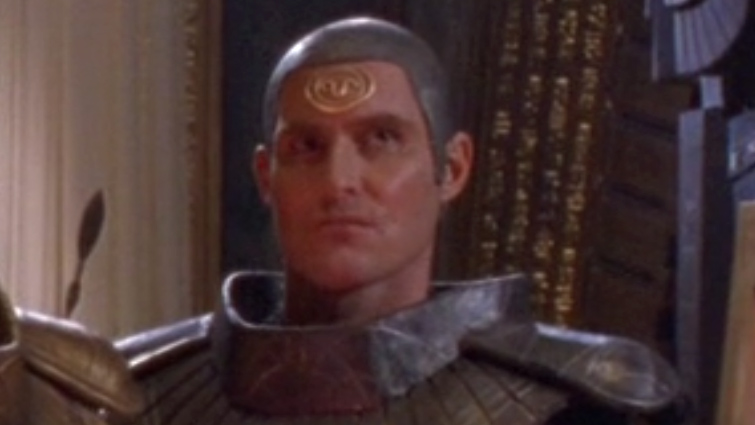 A Jaffa warrior in the service of Apophis. Kah'l served aboard the System Lord's Ha'tak ship on a mission to attack the planet Earth. A loyal servant of his master, he reported on the humans' lack of any evident resistance as the ship entered orbit of the planet.

Kah'l was a Jaffa of some rank in Apophis' forces, serving at the ship's pel'tac (command center) bearing the molten gold seal on his forehead normally designated for those who hold the rank of First Prime. It is possible that he succeeded Teal'c in this rank -- though the elder Jaffa master Bra'tac (whom Teal'c had succeeded as First Prime) was also present on board the attack ship.

Though his master escaped through the on-board Stargate, Kah'l was presumably killed when the ship exploded over Earth.

After playing the Jaffa Kah'l, actor Douglas H. Arthurs was quickly recast in a much more prominent role a few episodes later. He made his appearance as Heru'ur (one of Apophis' chief competitors) in "Thor's Chariot."

The Serpent's Lair - Kah'l reports to Apophis that the humans of Earth are vulnerable to attack.