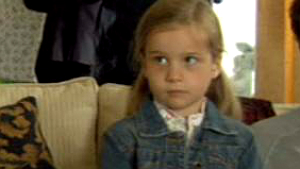 Daughter of Jeannie and Kaleb Miller, niece of Rodney McKay. Her mother's effort and devotion was singularly focused on Madison. It was her toy train that was were responsible for sparking the concept for the interdimensional energy collector inside Jeannie's mind. She subsequently spent several hours writing out the formula with finger paints -- an event Madison was perplexed to witness.

Madison had recently began learning ballet, the first recital of which her mother would miss while on her way to the Pegasus Galaxy.

A year or so later the little girl asked her uncle when he visited if he knew where Mum was and was told by her father that she had to go away on a short trip. The truth, however, was that Jeannie had been kidnapped on the order of Henry Wallace.

McKay and Mrs. Miller - Madison meets her uncle, Rodney, for the first time, not aware that he has arrived to whisk her mother away to the city of Atlantis.
Miller's Crossing - Little Madison wonders where her Mum has gone.