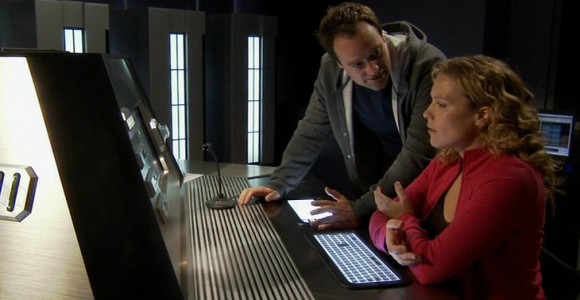 Rodney McKay goes in search of his sister on Earth after she is kidnapped by the head of a powerful corporation.

After being reunited with his estranged sister Jeannie a year ago ("McKay and Mrs. Miller"), Rodney has been keeping up a correspondence with her back on Earth. Unfortunately, certain powerful people are aware of this – and use it to lure Jeannie into a trap. Rodney goes looking for her, and the two find themselves captives.

Rodney wakes up in a laboratory on Earth with Jeannie, and the two meet the man behind all of this: Henry Wallace, the president of Devlin Medical Technologies. His company gets a lot of government contracts, and is one of their primary resources for integrating alien technologies acquired by the Stargate Program into Earth's medical technology. Wallace therefore has only the lowest level of access to information – but after a few too many astounding break-throughs by the military, he has managed to find out all about the S.G.C., Atlantis ... and Rodney McKay.

Soon Wallace shows the two brilliance scientists why he's brought them here: his daughter Sharon, a young woman suffering from leukemia. McKay isn't sure what he wants the two of them to do – neither are medical doctors. Wallace explains that Sharon has been given prototype nanites to try and heal her, but they are doing more harm than good. She is dying.

Rodney and Jeannie are experts on their coding ... but the problems haven't been worked out yet.

The rest of the Atlantis team, of course, won't take Rodney's disappearance lying down. Sheppard and Ronon visit Earth, where they work with Stargate Command and N.I.D. Agent Malcolm Barrett to try and find their missing people.