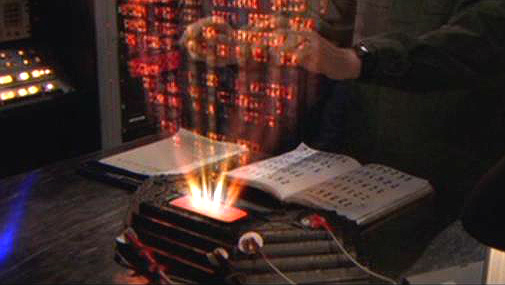 Device built by Merlin the Ancient to conceal his research on a weapon capable of destroying ascended beings, concealed in the Avalon cave under Glastonbury Tor. The technology is capable of sending a person to another dimension, effectively putting him or her out of phase with normal reality.

Once out of phase, Merlin was able to see the information on the terminal, including technical specifications likely pertaining to both the research and construction of the device. The keyboard, however, can be accessed from either dimension, allowing a person to enter and exit. The power source for the unit is relatively fixed, and reducing the energy which powers it makes it dangerously unstable.

Shortly after its discovery, Samantha Carter and the S.G.C. experimented with the phasing technology for more wide-scale defensive purposes.

Arthur's Mantle - Carter is unwilling to give up deciphering Merlin's computer terminal, eventually kicking herself and Mitchell out of dimensional phase.
Line In the Sand - Carter tests the device's ability to put an entire village out of phase to hide it from the Ori, but the effect is short-lived. Instead, she and Mitchell hide from the Ori inside a smaller bubble.
The Road Not Taken - Sam's experiments with Merlin's computer result in her being sent to a parallel reality, where she successfully uses it to hide the entire planet Earth from an Ori attack.