Line In the Sand 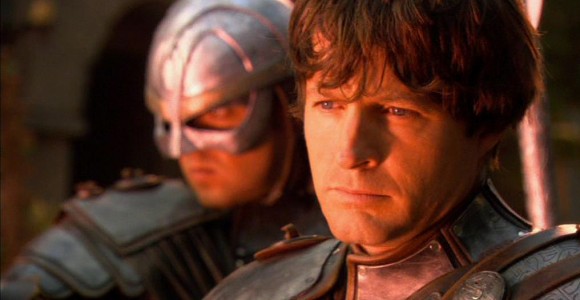 SG-1 tries to defend a planet from the Ori by hiding its people in another dimension. Vala attempts to convince her husband Tomin of the Ori's true motives.

SG-1 (sans Daniel Jackson) arrives on P9C-882, a world that is threatened by the coming Ori war machine. The fanatical servants of the evil, ascended beings are combing our galaxy with great effectiveness, forcefully converting whole planets to the worship of the Ori. SG-1 believes it is time to draw a line in the sand – this far, and no further.

To do so, Lt. Colonel Samantha Carter believes she can use Merlin's own technology in the fight against this enemy of the Ancients. By modifying his technology that can shift a person into a hidden dimension ("Arthur's Mantle"), Sam believes she can hide the village's entire population from the Ori Prior.

The team meets the people's leader, Thilana, a strong and principled young woman. She and her right-hand man, Matar, are extremely grateful when SG-1 offers to hide their people from the Ori and save their entire village. But things don't always go according to plan.

When the technology apparently fails, Matar suggests capitulating to the Prior's demands, but Thilana is resolute. Her people were formerly slaves of the Goa'uld, and she will not be enslaved to false gods once again. SG-1 remains to help defend the planet from the Ori army, but become separated during the battle. Carter is injured, and Cameron Mitchell tends to her while the two hide under the cover of a small dimensional bubble.

The Firstman, leader of the Ori army, arrives and challenges Thilana. They know that an entire building vanished soon after their arrival, and demand an explanation. A hooded Teal'c watches on to see if these people will betray SG-1 ...