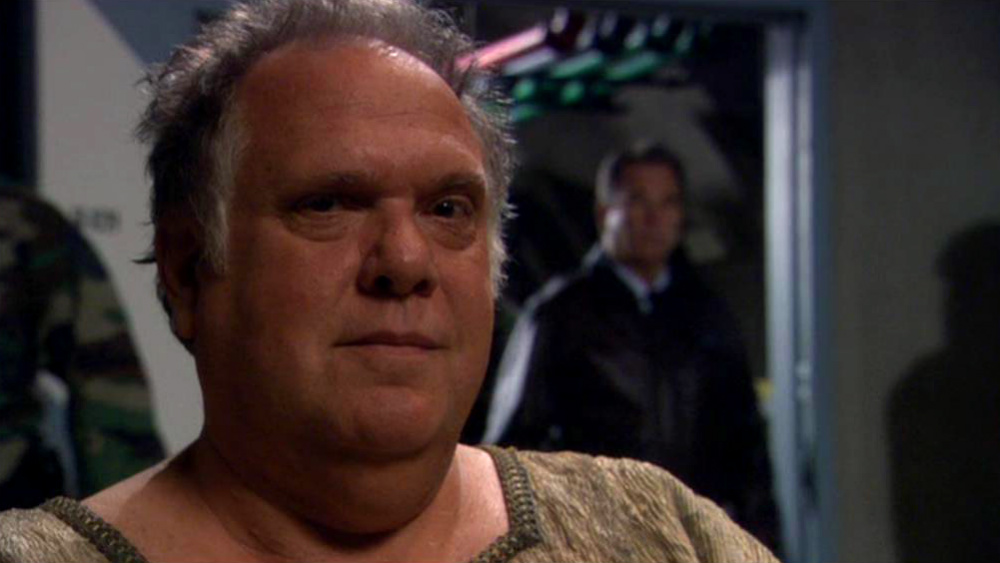 A minor Goa'uld who served Baal for many centuries. Nerus claims to be responsible for inventing many Goa'uld technologies, including a Goa'uld holographic projector (that has also been used by the Tok'ra). He prides himself with figuring out how to dial all the Stargates in the Milky Way Galaxy simultaneously, as he says he did for Baal during the Goa'uld conflict with the Replicators.

Nerus was eager to meet Teal'c (the Jaffa responsible for the original uprising) and the rest of SG-1, despite the fact that he had been fighting against them for many years.

Vala Mal Doran had known of Nerus and regarded him as little more than an insignificant Goa'uld and a gluttonous pig. Teal'c was also aware of him, but saw no reason why he could not be brought through the Stargate to Earth.

Nerus was intercepted by the Ori (likely a Prior) who successfully convinced him that they were the closest thing to pure godliness, instructing him to travel to Earth and join in an alliance under the pretext of developing new technologies against them.

He pushed General Hank Landry into destroying an Ori forcefield that had formed on Kallana with as much power as could be brought to bear (meanwhile indulging himself in Earth delicacies). This ploy actually strengthened the field and almost succeeded in giving the Ori a permanent foothold in the galaxy.

Afterward Nerus openly admitted his treachery to the General, looking forward to being sentenced to death, thereby ascending to the Ori. Instead, Landry placed him in a cell deep within Area 51 with instructions to be deprived of food until he came up with ways to fight the Ori.

When Stargates began disappearing General Landry interrogated Nerus in his Area 51 cell. After a banquet the gluttonous Goa'uld admitted that the gates were being stolen by Baal so that he could begin creating his own network and offered a useful gate address in return for his freedom. Once through the gate, however, Nerus headed straight to Baal and offered his services again.

However, a hidden computer virus inserted into Nerus's technology caused the power and shields on Baal's Ha'tak to fail, and a locator beacon he ate along with a cupcake lead SG-1 aboard the Odyssey straight to where they were. SG-1 beamed aboard Baal's ship and removed the stolen gates and D.H.D.s. Baal, less than impressed with Nerus, threatened to kill him with a staff weapon -- though his final fate remains uncertain.

Beachhead - Nerus arrives at the S.G.C. under the pretense of forming an alliance with Earth, insisting that as much destructive force as possible be used to assault the Ori force field on Kallana.
Off the Grid - Nerus sucessfully bargains for his freedom, then causes problems for Baal.