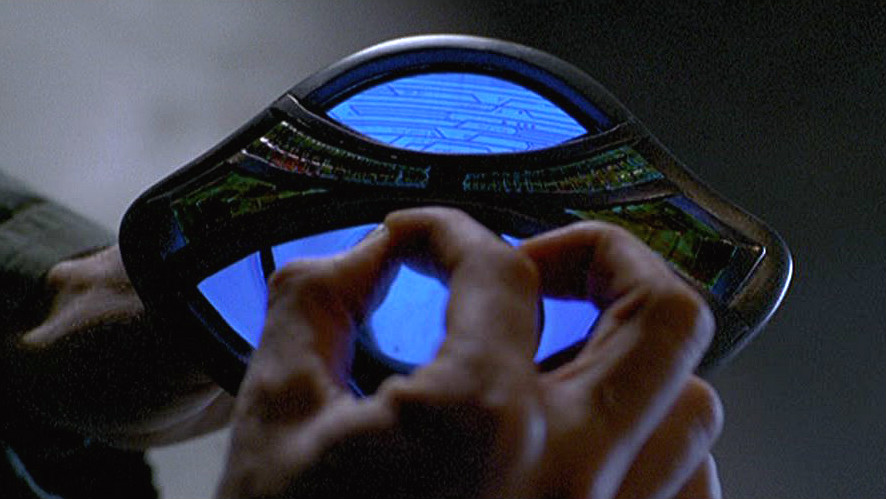 Device used to activate and operate the quantum mirror device, discovered by SG-1 on P3R-233 and brought back to Earth for study. The hand-held technology can turn on the mirror device, which is capable of sending a traveler to another reality with a mere touch of its surface.

A center control is used to "dial" back and forth between different realities. Small movements will attenuate the mirror to a universe relatively similar to the one currently connected. Larger movements will cause the mirror to jump in larger increments. Identifying a precise target world is not an exact science, like dialing up a specific address on the Stargate; instead, the user must identify subtle visual cues through the portal of the mirror's surface.

The controller does not retain a memory of the last reality is was connected to. As long as it remains powered on, the mirror will stay connected to that target universe. But if it is turned off that reality must be located again. Activating the controller will at least begin somewhere nearby the most recent point of connection.

The device was stored in Area 51 for further study. Presumably the controller was destroyed along with the quantum mirror, on the orders of General George Hammond.

There But For the Grace of God - Daniel inadvertently activates the quantum mirror when he picks up the controller from a table on P3R-233.
Point of View - Charles Kawalsky from a parallel reality teaches Daniel how to use the controller, which the people of his world have studied more extensively.