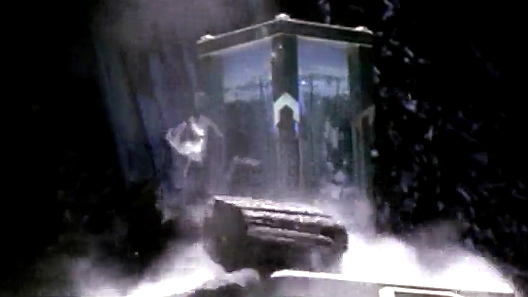 Aquatic container outfitted with a minute electric current to mimic human bioelectric energy, capable of maintaining a symbiote indefinitely. Humans have developed their own stasis unit in desperate times, but the Tok'ra and Goa'uld have been using a more sophisticated type of the technology for a much longer period.

Bloodlines - Captain Carter and Dr. Jackson encounter a symbiote stasis unit unattended by Jaffa priests. After they take a symbiote of their own Daniel, angered at what the race has done to his wife Sha're, destroys the tank in disgust.
Bane - After Teal'c begins to transform into alien insects he removes his symbiote, forcing SG-1 to place it in a makeshift stasis unit following its retrieval.
Threshold - Bra'tac removes Teal'c's symbiote, placing it inside a stasis unit until the Rite of M'al Sharran is completed.
Desperate Measures - Adrian Conrad's associates successfully outfit a symbiote stasis unit to preserve the Goa'uld until it is time for it to be implanted in Conrad.
Summit - Ren-al unveils Lantash, who has been in recovering in a stasis unit since its host succumbed to za'tarc mind control nearly a year before.
Birthright - Fraiser sustains five symbiotes in stasis units while their previous owners attempt to allow their bodies to adjust to tretonin.