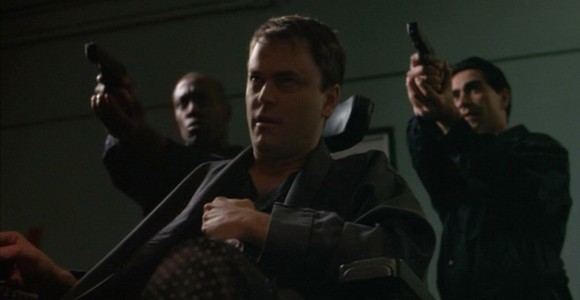 When Major Carter is kidnapped by a terminally ill man who intends to use a Goa'uld symbiote to save his life, O'Neill is forced to team up with an old foe to find her.

It's a normal Saturday for Samantha Carter, who fumbles for the keys to her car outside her health club. But the day changes dramatically when a group of men dressed in black pull up in a white van, grab her and throw her in.

It isn't long before the S.G.C. notices Carter's absence, and begins a search. But General Hammond reminds Jack O'Neill that they have no jurisdiction outside of the base. Jack understands that his search is "unofficial," and finds a homeless man outside the health club. Though the man isn't entirely forthcoming, O'Neill does learn what he saw. Sam has been kidnapped.

With Daniel's help, he places a message on an Internet bulletin board known to be frequented by N.I.D. members (who use various public message systems to pass coded messages). Knowing that former government operative turned international treason convict will be monitoring his old friends, Jack asks for a meeting with Harry Maybourne.

It doesn't take long for Maybourne to show up, despite the fact that he's on the run from the law. O'Neill asks him what he knows about Carter's abduction, and he claims to know nothing -- but suggests he take his question to Colonel Frank Simmons, who works with the N.I.D. through the Pentagon.

Jack takes the advice, and finds that the arrogant bureaucrat isn't anxious to talk to him. In return for Maybourne's tip, Simmons shows Jack evidence that Maybourne had recently received a $3 million deposit in an offshore account. The S.G.C. tracks the company that made the deposit to wealthy businessman Adrian Conrad -- who has not been seen publicly in six months.

Maybourne, meanwhile, goes to visit his previous employer. He asks Conrad's assistant and lover, Diana, about Carter's disappearance -- and is rebuffed. He's received his money for his work.

What was the money for? O'Neill finds Maybourne, and finds out. Harry secured a Goa'uld symbiote from the Russians, who had captured a Jaffa during the brief time they had an operating Stargate program (which Maybourne also assisted in ["Watergate"]).

Handcuffed to a bed in an abandoned hospital, Major Carter soon learns the intentions of her captors. They intent to implant the Goa'uld into the wealthy Mr. Conrad, who is suffering from a terminal disease. They need Carter to help them remove the symbiote once it has cured his disease -- though they won't tell her how they found out that she was once blended with a symbiote ("In the Line of Duty").

Sam can't help them, since that Goa'uld was a Tok'ra who gave its life willingly to save hers. She warns them that they do not know what they are dealing with, but it's too late. Conrad is near death, and orders his men to give him the Goa'uld. Though he is strapped down to a bed, the Goa'ulded Conrad easily convinces his lover to release him -- and then knocks her unconscious, disappearing in to the tunnels underneath the hospital.

SG-1 tracks Carter to the hospital, which is owned by Conrad's company. They disable the few guards that Conrad has posted, and stop the doctors before they kill Sam in order to do a direct examination of her brain tissue. Jack leaves Maybourne to watch the doctors, as he and Carter go in search of the Goa'uld.

They find the tunnels below the building, and split up. It's O'Neill who finds Adrian Conrad -- but someone shoots Jack in the back before he can take the Goa'uld into custody. Colonel Simmons steps out of the shadows, and offers the Goa'uld a means of escape.

Carter finds O'Neill, and the team rushes him back to the S.G.C. infirmary. His bullet-proof vest stopped one bullet, but another caught him in the arm. He believes it was Maybourne who shot him.

As the team considers how to handle a young Goa'uld loose on Earth, Simmons approaches his new "guest" with an offer. In exchange for information (the Goa'uld possess genetic memory), he tells Conrad that he has much he can offer ...