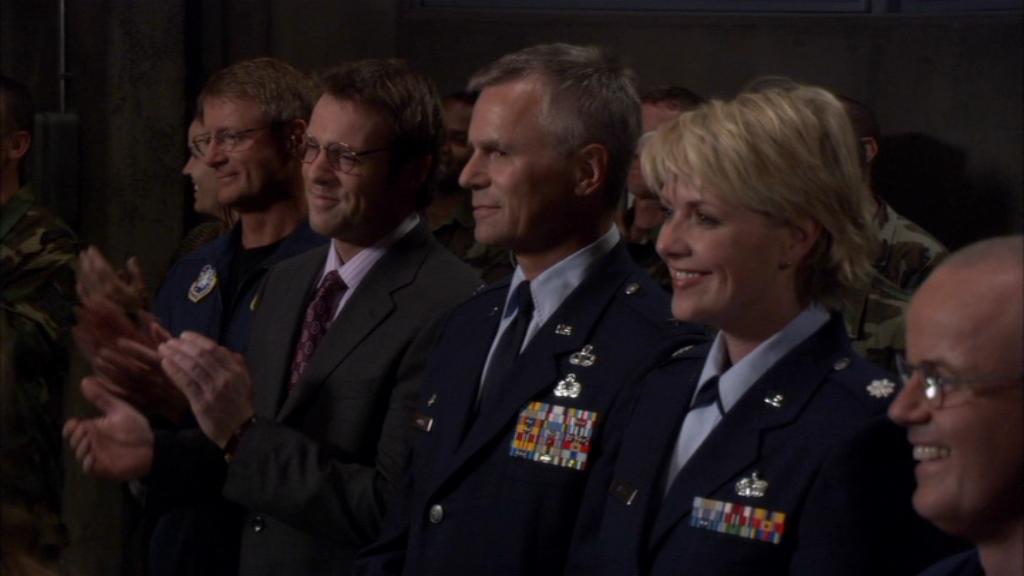 Originating from the planet Earth, humans are a most common sight on Stargate-occupied planets. Thousands of years ago the Supreme System Lord Ra discovered Earth, from which the Goa'uld scattered humans throughout the galaxy. Certain numbers of humans were genetically altered into Jaffa, humans designed for the purpose of carrying the larval form of the Goa'uld. The Goa'uld also impersonated the deities of ancient civilizations on Earth, to gain obedience and worship.

Over the centuries, many planets inhabited by humans once under domination became devoid of Goa'uld interaction, permitting the humans independent development in the directions of their original cultures. Egyptian, Roman, Greek, and many other root cultures gradually began to spring up across the galaxy in their own unique forms. But many worlds still suffer from Goa'uld oppression and, consequently, are underdeveloped. The past millennia have been wasted for them by poverty under the power of Goa'uld lords and Jaffa soldiers.

The humans of Earth are known by the Goa'uld and Jaffa as the "Tau'ri." On Earth, they have unlocked the secrets of the Stargate and begun to explore the universe. The teams of the S.G.C. have found countless human cultures, and helped to liberate many of them from the Goa'uld. In so doing, the Tau'ri have taken their place on the galactic landscape -- so much so that, when the advanced Asgard decided to take themselves off the board, Supreme Commander Thor declared humans to be "the Fifth Race," now on equal footing with the Asgard themselves. They bequeathed humanity with the sum total of their knowledge and advanced technology.

"Stargate" the Movie - Earth unburies and opens its Stargate, discovering the planet Abydos and freeing its people from the rule of Ra.
Children of the Gods - After a brief Goa'uld attack through the decommissioned Stargate, the United States forms Stargate Command to explore the universe.
The Enemy Within - The S.G.C. learns from Teal'c that Earth is the original world of humans -- the lost world of the Tau'ri.
Within the Serpent's Grasp - Earth is threatened by an all-out attack by Apophis, who is poised to exact revenge for the death of Ra.
The Serpent's Lair - SG-1 destroys Apophis's two ships and saves Earth from his attack.
The Fifth Race - O'Neill encounters the advanced Asgard, who tell him that humans are already on their way toward becoming peers with them.
Fair Game - The Asgard negotiate with the Goa'uld to include Earth in the Protected Planets Treaty.
2010 - SG-1 changes history to narrowly avoid the near-extinction of the human race by the Aschen.
Fail Safe - The Goa'uld violate the Protected Planets Treaty by covertly attempting to destroy Earth with a naquadah-rich asteroid.
Redemption, Part 1 - Anubis tries to destroy Earth by destroying the gate with a weapon of the Ancients.
Disclosure - The United States and Russia inform China, France and Great Britain about the existence of the Stargate, and the Goa'uld threat to Earth.
Fragile Balance - SG-1 discovers that a rogue Asgard scientist, Loki, has been abducting and experimenting on human subjects in the hopes of solving his species' cloning problem.
Lost City, Part 2 - Earth comes under direct assault when Anubis brings his fleet, trying to stop SG-1 before they uncover a powerful weapon hidden beneath the ice of Antarctica.
Covenant - Sam Carter tries to convince wealthy industrialist Alec Colson not to go public with the existence of alien life.
Full Alert - Relations between the U.S. and Russia are strained when Russian military leaders claim that the U.S. government has been compromised by the Goa'uld.
Enemy at the Gate - Earth comes under direct attack once again, this time by a Wraith super-hive -- leading to the destruction of the Ancient weapon in Antarctica.