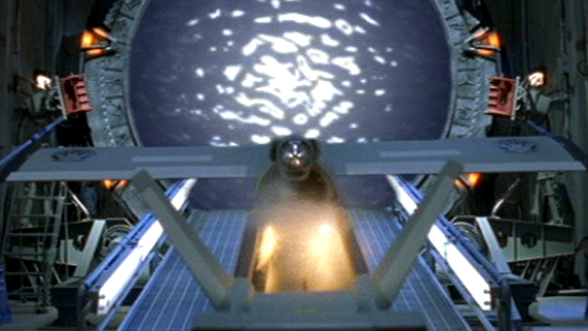 "Unmanned Airborne Vehicle." This versatile craft, when launched from the S.G.C., is capable of traveling through the Stargate and surveying the surface of alien worlds several kilometers from the Stargate, transmitting data back to the S.G.C.

The U.A.V. is useful for conserving time when it would take many hours for a unit to reach the surveyed areas on foot. It can also be modified with U.C.A.V. armaments, where a powerful missile is mounted to each wing. And it can also be configured to deliver a payload to a target, delivering much-needed supplies to S.G.C. personnel who cannot reach the Stargate.

Stargate Command has also used the airborne craft to "paint" enemy targets, firing missiles through the gate directly to the location pinpointed by the U.A.V.

Enigma - The U.A.V. is first tested on Tollan, surveying volcanic conditions.
One False Step - The S.G.C. launches the U.A.V. to scan a much larger area of alien terrain, before it crashes into an alien organism -- bringing a life-threatening illness to the indigenous people.
The First Ones - The U.A.V. is employed to search for Daniel Jackson, who has been kidnapped by an Unas.
The Fifth Man - The U.A.V. is launched to search for Colonel O'Neill.
The Sentinel - With targetting aid from the U.A.V., two encampments of Jaffa are blown away.
Fallen - The U.A.V. is used to scout around the Stargate on Vis Uban, and is unsuccessful at finding any hint of Ancient technology.
Death Knell - Sergeant Siler is ordered to equip the U.A.V. with U.C.A.V. weapons armaments, but a Kull warrior shoots it down after the Alpha Site has been destroyed.
Sacrifices - Stargate Command uses a U.A.V. to air-drop tretonin to Teal'c inside hostile Goa'uld territory, but it is shot down by Moloc's Jaffa.