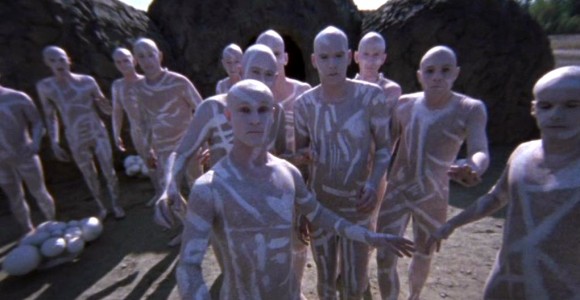 A group of primitive aliens begin to fall deathly ill after SG-1 arrives.

The S.G.C. launches a new U.A.V. probe – a small, remote controlled airplane – to explore the planet PJ2-445. The probe can gather data from much farther away from the Stargate than is practical for an SG team to explore on foot.

But a few minutes after take-off, the plane does not respond to controls and begins to go down. It crashes into a large plant-like structure, knocking it to the hard ground. A curious alien appears in the camera's view, and drags the U.A.V. away.

SG-1 visits the planet to recover the probe and try to make contact with the primitive-looking aliens. The U.A.V. crashed 10 miles from the Stargate, leaving the team with a several hour walk. When they arrive, they are greeted by the curious village of aliens. They appear naked, with a decorative white paint that hardens into a second skin. They are hairless, and do not speak – at all. Instead, the aliens make high-pitched noises for the most basic of communication.

The villagers investigate SG-1, and one takes Daniel's knife. Carter moves to retrieve it, and her hand is cut when the villager is startled by Daniel's sneeze. Another of the aliens has lubricant from the U.A.V. on his hand.

SG-1 becomes painfully aware of all the foreign substances they have introduced to the villagers when one of the doubles over in pain and falls to the ground. He is unconscious, the victim of an unknown illness. As O'Neill and his team try to help the villagers comfort the increasing number of sick, Dr. Fraiser arrives to assess the situation.

Captain Carter returns to Earth with Dr. Fraiser, who decides to bring along one of the villagers for further tests. Teal'c and O'Neill travel to other villages nearby to see if the disease has spread. Daniel remains with the aliens, to try and let them know that the team is trying to help.

While en route, O'Neill nearly collapses. He is increasingly dizzy, and is coming down with a headache. He and Teal'c learn that the disease has affected other villagers, and return to Daniel.

Daniel, meanwhile, has witnessed one of the small plants in the village grow to over six feet tall, then shrink down again as he approached. He sets up a video camera to monitor the phenomenon. Teal'c returns to the Stargate to check in with Earth, while Daniel and Jack remain at the village – though the two of them are growing increasingly agitated with one another, and find themselves in a shouting match.

After Teal'c returns, Daniel and Jack return to Earth. Nearly incapacitated by headaches before entering the gate, they immediately begin to feel better. But when viewing a video recording made on the planet, Daniel again becomes agitated. He and Carter determine that there is something on the planet that is adversely affecting all of them – something the video camera recorded, but could not be seen ... or heard.

Carter runs the video through the base computer system, and finds a loud and disturbing noise beyond the human range of hearing. It was present during their entire time on the planet, and is being emitted by the plants. When the U.A.V. crashed into one of the plants, the sound changed – causing the sound-sensitive aliens to begin to fall ill, and causing severe irritability, headaches and dizziness in SG-1. It was the sound itself that interfered with the probe's radio control.

Dr. Fraiser plays the sound from the U.A.V.'s original recording – before the plant was damaged – and the alien at the S.G.C. begins to recover from his illness.

Teal'c returns through the Stargate soon after. He had been in great pain on the planet, having eventually succumbed to the hidden noise. But he also discovered that the plants are all connected. SG-1 returns to the planet with frequency emitters to broadcast the correct sound, and the aliens are made well again. The team leaves the machinery on the planet until the planets recover.

As they leave, SG-1 watches the villagers emerge from their huts and begin singing. The plants grow tall and begin to blossom. The two species, it appears, live in symbiosis with each other.