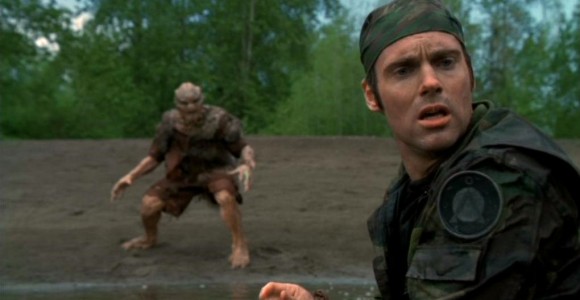 After Dr. Jackson is taken captive by an Unas while on an archaeological dig, the S.G.C. mounts a rescue operation – but discovers a danger of their own.

Dr. Daniel Jackson has spent the last three weeks on an archaeological dig with SG-11. He and his colleague, Dr. Robert Rothman, study artifacts uncovered on an ancient world, and they conclude that the planet – P3X-888 – was likely the original homeworld of the Goa'uld parasites. The symbiotes they uncover have been fossilized for hundreds of thousands of years.

But all is not dead on this world. A large creature rushes from the woods nearby, killing one man and wounding several others. He renders Daniel unconscious, and drags him off into the woods.

Hours later, Rothman makes it back to the Stargate and returns to Earth, where he reports the attack. With General Hammond's permission, Colonel Jack O'Neill and the rest of SG-1 mount a rescue operation to find their comrade. SG-2, led by Major Coburn, accompanies them.

Daniel awakens and finds himself bound by the creature: a primitive Unas. Though he fears he is about to become the evening meal, Daniel tries to communicate with the creature. He does not seem to speak any intelligible language – though he does engage in a ritual chant. Daniel theorizes by his appearance – less pronounced chin and facial bones – that this Unas is a subspecies of the Unas previously encountered by SG-1 ("Thor's Hammer," "Demons"), and perhaps a juvenile.

With Coburn's men guarding the Stargate, SG-1 and additional men from the S.G.C. trek the three hours to the dig site where Daniel was taken. With Teal'c tracking the Unas, they proceed – but are unable to contact SG-11 by radio.

Daniel continues to try and communicate with his captor, and learns that his name is (probably) Chaka. The beast is startled to hear Jackson say his own name. Eventually, they stop to rest. Daniel takes a drink of water from a lake, and the Unas sets down the rope by which he has Daniel. Jackson sees the opportunity and runs.

Chaka catches up to him soon, and Daniel flees from him into the lake's cold waters. His hands bound, he carefully swims across – but Chaka runs around and is waiting for him on the other side. Jackson stands up in the water, looking for a way out – and sees a creature swimming quickly toward him. He flees toward Chaka, who saves his life by grasping the Goa'uld symbiote as it leaps from the waters at Daniel. Chaka kills the creature, and marks Daniel's face with its blood.

Though Jackson and Rothman had believed the Goa'uld to have left this world many thousands of years ago, he now sees that the parasites still thrive in the primordial waters of this world.

O'Neill's men find Major Hawkins, commander of SG-11, just staring off into space. He seems to be in shock at what has happened, and at the terrible tragedy that his men are dead. He joins their ranks in searching for Daniel.

Jackson, meanwhile, has been taken into a cave by the Unas. Chaka roasts the Goa'uld head on a stick, and gives it to Daniel to eat. Daniel refuses, and the two engage in a game of "toss the symbiote head" as Chaka insists that he eat. Finally, Jackson takes food from his vest pocket and offers it to Chaka. The two are beginning to establish a relationship.

Teal'c discovers the lake teeming with Goa'uld parasites, and realizes that anyone among them may have been taken as a host. He explains this to O'Neill, insisting that all of them put down their weapons. O'Neill orders the team to do so.

O'Neill binds the hands and feet of everyone present, and then Teal'c binds his. Teal'c is the only one they can be certain was not taken by a Goa'uld, since a symbiote cannot blend with a Jaffa (he already has a larval symbiote within him). Teal'c leaves them, intending to find and rescue Daniel on his own.

Hawkins soon breaks his bonds – he has been taken as a Goa'uld host, and thus possesses exceptional strength. He picks up a weapon and moves to shoot Colonel O'Neill – but receives two blasts in the back from Teal'c's staff weapon. Teal'c had been watching, knowing that anyone possessed by a symbiote would be able to free himself.

Teal'c frees O'Neill, Major Carter and the others – but finds one more Goa'uld among them. Dr. Rothman has also managed to free himself, and he overpowers Teal'c and shoots Captain Griff with the staff weapon. O'Neill riddles Rothman with bullets, killing him.

In the cave, Daniel has examined pictographs drawn on the cave wall. He understands now that he is not simply the evening meal; Chaka is a young warrior going through a tribal rite of passage. To prove himself as an adult warrior, he must capture a beast (in this case, Daniel), bring him back to the tribe, and kill him.

Chaka pins Jackson to the wall and scrapes his face, spreading his blood on the cave wall. Daniel recognizes that he has been marked for death.

The group proceeds on and locates Daniel, as Chaka brings him before the leader of his tribe. But with O'Neill and Carter's weapons trained on the Unas, Daniel tells them not to shoot. Chaka, he believes, is pleading with the tribe's alpha male for his life. He does not wish to kill Daniel, but to bring him into his clan. The two have become friends through their experiences.

The alpha male finally refuses, and rushes at Daniel. O'Neill and Carter shoot him – which slows him down, but does not stop him. Chaka attacks the alpha male, though, beating him to death. The others in the tribe look on, and recognize Chaka as the new alpha male.

He invites Daniel to stay with them, but he must decline.