From The Stargate Omnipedia
Revision as of 22:33, 14 May 2018 by GateWorld (talk | contribs) (Created page with "File:Astraldiner2.jpg An extrapolation of the ascended realm so Daniel Jackson's mind could understand people and events in their proper context while...")
(diff) ← Older revision | Latest revision (diff) | Newer revision → (diff) 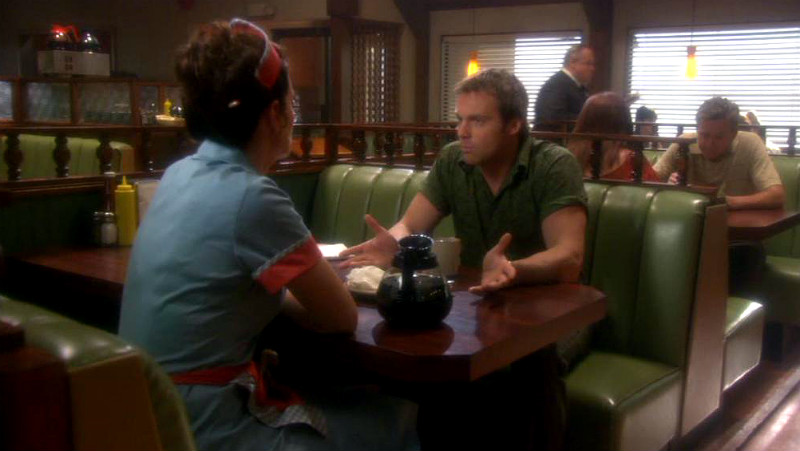 An extrapolation of the ascended realm so Daniel Jackson's mind could understand people and events in their proper context while he was debating whether or not to fully ascend. Its design (and patrons) in the truck-stop diner were modeled in a motif suiting the late 1960's on Earth. In fact, the locale was taken directly from Daniel's memory. Dr. Nicholas Ballard took his grandson to this diner following his parents' funeral, likely placing the restaurant near New York.

The restaurant was inhabited by a handful of Ancients, but mostly other ascended beings who had reached this higher plane. Oma Desala claimed they were present merely to watch and monitor, ensuring the great powers of the ascended beings was not abused. At the same time they refused to speak to any being that had not fully achieved their level of enlightenment.

Anubis also had access to this environment, disguising himself as an American businessman named Jim, who frequently picked up the latest copy of The Ascended Times near the door and ordered a fresh cup of coffee at the bar.

Being a realm of energy, one could order any food they liked. Oma Desala's role was carried out in the form of a waitress, symbolizing her constant diligence in serving everyone's needs -- in eternal penance for once allowing Anubis to ascend.

An edition of The Ascended Times stated that the diner had received infinite status.

Threads - Daniel interacts with Jim and Oma in the Astral Diner while he debates whether to ascend, ascend and decend, or allow himself to die.