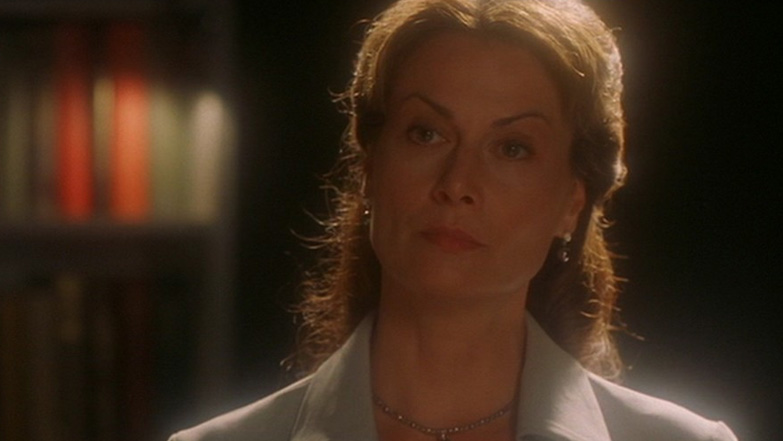 A wise, non-corporeal being, Oma Desala is one of the Ancients -- the original builders of the Stargate network. Oma focuses herself on helping other beings ascend to the higher plane on which the Ancients now live. In doing so, she has become an outcast by the other Ancients.

Going against the ways of the Ancients, Oma believes it is her responsibility as an ascended being to guide those beneath to the "Great Path" of enlightenment. Only able to open the door for them, she can guide individuals to the path, knowing it is they, and they alone, who can make the decision of whether or not to travel the great path. She is known for speaking in riddles, but her words carry great (if not confusing) wisdom.

Oma is the self-appointed guardian of the Harcesis Shifu, the young son of Apophis and Sha're. Through her guidance Shifu learned to deny the evil Goa'uld knowledge he possesses, and to ascend himself. She, and those who follow her, walk a fine line between going against the wishes of the other Ancients by interfering with other races, and maintaining their rules enough so that she does not bring down their wrath, which would surely put an end to her altruistic efforts.

After helping a dying Daniel Jackson to ascend and join her group, Oma was forced to prevent him from killing the Goa'uld Anubis to save the people of Abydos. Instead, she helped the entire population to ascend when the Goa'uld destroyed their world. And when Jackson was punished and forced to return to his mortal body with his memory wiped out, Oma is believed to have circumvented the judgment of the others by allowing Jackson to slowly recover his memories.

Later, it was Oma herself who chose -- at Daniel's prompting -- to confront Anubis directly. She admitted that it was her who was responsible for ascending Anubis after he deceived her, and that her punishment given by the Ancients is to have to watch him wreak havoc on the galaxy. But with Anubis threatening to use the Ancient super-weapon at Dakara to wipe out all life in the galaxy and reshape it as he wished, Oma engaged him in battle -- knowing that neither of them could ever win, but that by sacrificing herself she could keep him locked in combat forever.

When actress Mel Harris was offered Oma Desala she took the role for her son, Byron, who was a huge SG-1 fan. The two had previously toured the Stargate sets while in Vancouver.

Maternal Instinct - Oma Desala protects Shifu, the Harcesis of Apophis and Sha're, helping Daniel to realize that the infant is best kept in her care.
Meridian - When Daniel arrives at death's door, Oma appears to guide him to the great path. With her help, he ascends to a higher plane of existence.
Full Circle - Oma monitors Daniel's activities concerning Anubis's occupation of Abydos, and may be responsible for preventing him from destroying the vile Goa'uld. When Anubis destroys Abydos, Oma helps Skaara and the entire population to ascend.
Fallen - After the Ancients force Daniel Jackson to descend back to his mortal body without any of his memories, the team concludes that Oma may have circumvented their sentence by allowing him to slowly overcome his amnesia.
Threads - Oma saves Daniel when he is killed by Replicator Carter. In a holding space in between ascension and mortal life, she reveals to him that she was responsible for ascending Anubis -- then engages him in eternal combat in order to save the galaxy.