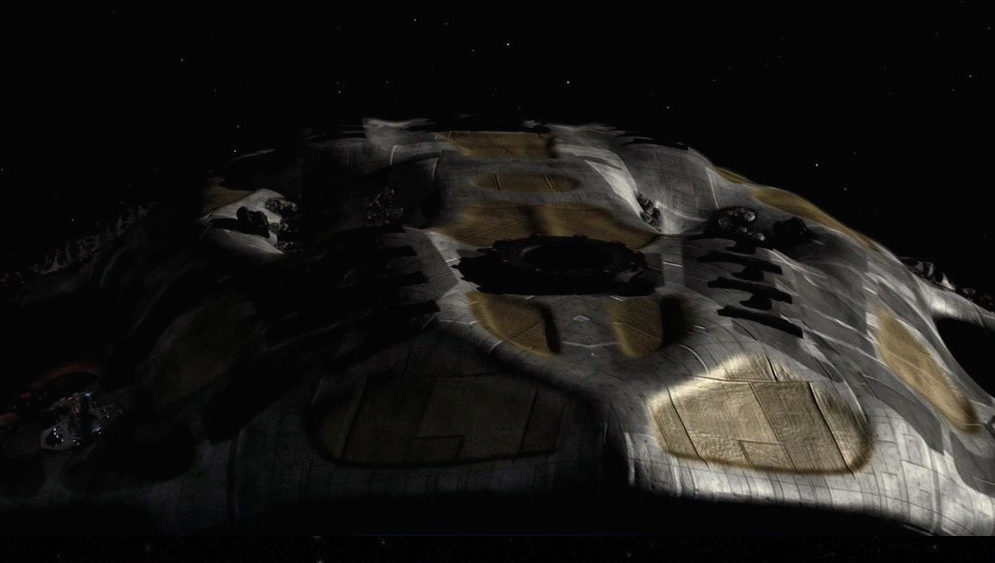 Capital ship created by an advanced alien race long ago to control a huge fleet of drone ships -- unmanned, space-based weapons created to win a war. Both sides of the conflict appear to have died out long ago, but the drones and command ships remain and (after being awakened from their dormant status by Destiny and the Ursini) continue to target and destroy all advanced technology they detect. They likely have very advanced sensors, able even to detect the subspace event of a Stargate activation when the ship is outside that star system -- giving them a new target.

Like the drones, the command ships are believed to be unmanned and completely automated. They are massive vessels that house many hundreds of drones, which can be launched from a number of bays located at various parts of the ship. It is not known if the command ships themselves are armed.

Because the effectiveness of the entire weapons system relies on command ship, it is programmed strategy is to remain on the far outskirts of a battlefield -- close enough to send a swarm of drones after enemy ships but out of range of their opponents' weapons. They communicate with the drones via a sub-space communication link, which Destiny's crew has been able to disrupt -- though only for a few moments.

Resurgence - Destiny is dragged into the Ursini's conflict with the drones when the Ursini tow the damaged ship into combat and tell them to take out the command ship.
Deliverance - Destiny's crew succeeds in destroying one command ship but is soon under siege by another, which they barely escape.
Common Descent - Destiny flees into an emergency F.T.L. jump when a drone command ship finds them again, only to lead the drones to a populated world.