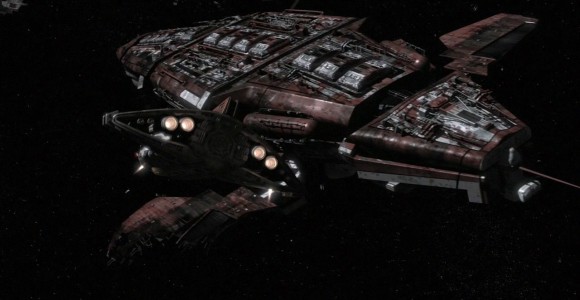 The crew's new-found control over Destiny's flight path introduces new risks when they find themselves in the middle of a war between two races.

Drs. Adam Brody, Lisa Park, and Dale Volker work at consoles on Destiny's bridge. Nicholas Rush joins them. He notices Eli Wallace's absence and an annoying alarm coming from Park's station. He fixes it, and sits in the command chair to work. When Brody spots a distant energy signature on the sensor readings ahead on the ship's path, he turns his station over to Rush. Summoning Colonel Everett Young, the scientists discuss whether to divert Destiny from her mission to investigate. Volker reminds them of how disastrous their past encounters with aliens have been. But Young decides that the potential rewards are worth the risk.

Rerouted off its flight plan, Destiny drops from F.T.L. flight into a floating debris field of a large space battle. The battle must have taken place long ago, and there are no survivors evident here. But one of the derelict ships is similar to the battle-damaged vessel Young and Rush recently boarded ("The Greater Good").

Lt. Matthew Scott visits Chloe Armstrong, still under lockdown in her quarters, to tell her of their discovery. Her transformation is continuing, and she reveals a patch of alien-looking skin on her chest. She insists that he stop denying her reality – that she will become a threat. When Young summons Scott to form a boarding party, Chloe cries over her fate.

Meanwhile, Camille Wray corrals Eli. Worried by his recent lapses, she wants to talk. Having been plucked from his mom's home and video-game lifestyle, Eli feels entitled to a little bit of depression. Riley's loss ("Aftermath") hit him hard. But when Camille brings her up, he refuses to discuss losing Ginn ("Malice").

Scott, Brody, and MSgt. Ronald Greer suit up. Using the restored shuttle ("Visitation"), they approach the familiar derelict ship. Anchoring a line, Greer leaps across a gap separating the vessels. Once Brody joins him, they start to explore into the corridors.

Varro, confined to quarters since Simeon killed Ginn and escaped Destiny ("Malice"), watches from his porthole. He is surprised when Lt. Tamara Johansen visits. As she shares news of the deception surrounding her baby's death ("Intervention," "Visitation"), they both see something move rapidly past the porthole. T.J. radios and informs Colonel Young: there is something else out there.

On the bridge, Eli's battle simulation pieces together the fragments in the debris field. He shows the results to the others on the computer display: what they previously thought were fragments of larger ships are really smaller vessels – intact and dormant. As more ships awaken, Young orders the away party to return. He has Eli try to broadcast a message conveying that Destiny is not hostile, even as shields go up and weapons come online. The unmanned drones strafe Destiny with weapons fire.

Rush seals a hull breach. Park reroutes power to weakening shields. Multiple overloads drain power from shields and weapons. Rush wants to jump away into F.T.L. – but the shuttle hasn't made it back yet, so the Colonel refuses.

In the time it takes the shuttle to clamp down on Destiny, the F.T.L. engines are damaged. Weapons are failing. Several areas have gone dark. The shields are weakening. Destiny is no match for the 20 or so small ships, and tries to escape using sub-light engines.

Suddenly, the Ancient seed ship where Colonel David Telford was stranded several months ago ("Awakening") appears out of F.T.L. Telford's voice crackles over the radio, and the seed ship leads Destiny into the nearby sun. The intense heat and radiation destroy the pursuing drones. Destiny deploys power cells and recharges its power stores. Watching from ports in their respective quarters, Varro turns away ... while Chloe stares into the intense light.

Telford has bought them some time, as Destiny remains damaged and in the star system, but the drones must fly around the star to reach them. Once through the corona, Telford boards Destiny. He explains that the aliens on the seed ship – called the Ursini – are not hostile, merely desperate to get home. They had inadvertently awakened the drones, just as Destiny did, and have been fighting them ever since. Their search for a way home and a method of defeating the drones led them to the seed ship. Sharing nutrients with Telford, they also used their stasis pods to download their history directly into Telford's mind. While direct verbal communication remains impossible, he was able to learn who they are and what they want.

The Ursini need Destiny's assistance to destroy the command ship controlling the massive fleet of automated drones. Wray, Rush, and Young discuss Telford's plan to dock with the seed ship and let her F.T.L. engines carry them to safety. Once Destiny is repaired, they can attack the command vessel together. Rush wants to double-cross the Ursini and leave as soon as Destiny's F.T.L. engines are fixed. Wray opposes this. Young suggests they might instead to use the seed ship's power to dial the Stargate to Earth.

Eli shares this information with a non-responsive Chloe. She comes to long enough to warn him not to trust the Ursini. Back on the Bridge, Eli gets a lecture from Rush about not getting beaten down. Even if he could get revenge on the man who killed the woman he loved, it wouldn't change the fact that she's gone. Before Eli can respond, the others arrive and Telford's plan is put into action. The docked ships jump away together.

Again, Eli visits Chloe. But while he is with her, Destiny drops from F.T.L. flight – not in a safe place to make repairs, as the Ursini had promised, but instead close to the command ship and the many drones defending it. The Ursini have double-crossed Destiny first. As Eli starts for the bridge, Chloe convinces Eli to take her with him. Her guard insists on checking with Young, but Chloe slams him against a bulkhead and escapes. Her alien programming seems to be taking over, and Eli has inadvertently let her out.

Stunned, Eli reports her behavior. Colonel Young has Brody seal off that section of the ship and orders Lt. Scott to find her. Meanwhile, Telford returns to the bridge, unaware of the Ursini double-cross. The drones attack Destiny with ruthless efficiency, and injured personnel flood the infirmary.

Chloe breaks containment. Scott finds her working at a console in the Control Interface Room. When he touches her, she comes out of her trance. She tells him it's too late.

The battle rages outside the ship, where Destiny and the Ursini-controlled seed ship are clearly no match for the enemy forces. With weapons and shields failing, and the Ursini refusing hails, Destiny begins to falter under the drones' relentless bombardment. The ship's destruction now seems all but certain.