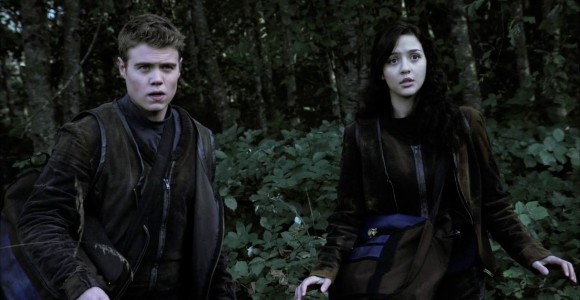 Destiny comes upon a colony of humans who claim that their civilization was founded two thousand years earlier ... by Destiny's own crew.

Adam Brody and others examine Destiny's struggling air handlers. They are working at only 20 percent efficiency, and people are feeling the effects.

Apparently aware of the problem, the ship drops from F.T.L. flight to allow the crew to stop at a nearby planet. The computer indicates that there is one Stargate in range, and Colonel Everett Young orders an away team to prepare to go through the Gate. 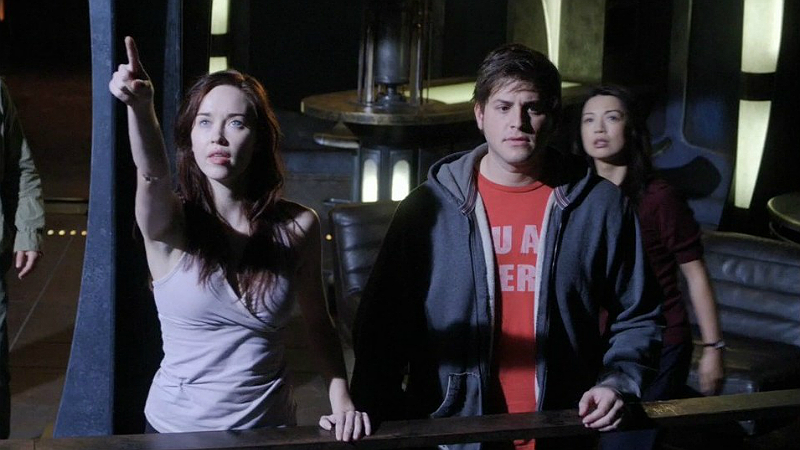 A drone command ship appears. But Destiny is fully two hours and ten minutes away from being able to jump back into the safety of F.T.L. flight. Destiny fires up the engines and flies faster at sub-light speed. Fortunately, the command vessel can barely keep up.

Having tangled with the unmanned drone weapons in recent weeks ("Resurgence"), the crew knows full well the severity of their situation. Dr. Nicholas Rush transfers more power to the shields as Destiny herself cuts power to the sub-light engines. Not knowing if the drone they still on board ("Deliverance") was used to track them, it is pushed overboard and destroyed.

The command ship approaches and launches waves of drones. Relying on the shields, Destiny endures a brutal attack lasting for hours – until she can safely jump.

But the ship cannot stay in F.T.L. forever to avoid the enemy ships. Eventually Destiny tries to drop out and dial a Stargate. Reluctant to take the risk but desperate for lime to fix the air filters ("Air, Part 3"), Young allows it. With no sign of drones in the area Scott, Greer, and a team step through the Stargate. Much to their surprise two humans approach the Stargate, and Scott orders them to stop. Replying in English, the young man and woman identify Scott and Greer by name. They claim that the people from Destiny are the "ancestors." 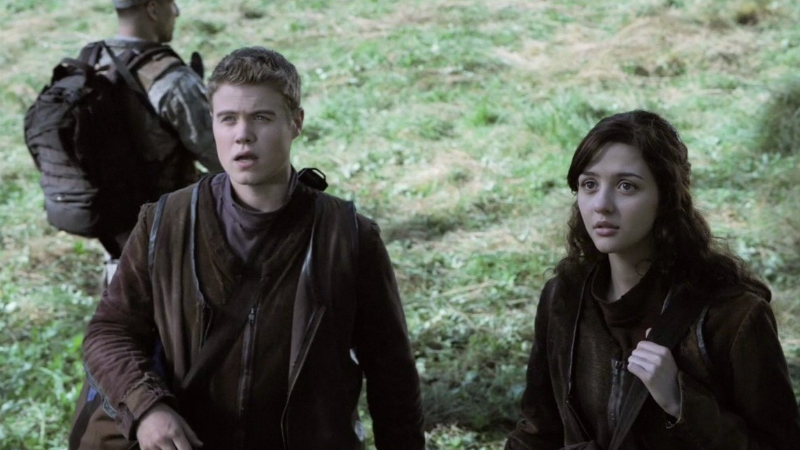 They tell them that their ancestors — those presently living on Destiny — founded a civilization on a planet they named "Novus" over 2,000 years ago. There is kino footage to prove the story. Eli believes these people are indeed the decedents of the crew who escaped Destiny when the Stargate was last dialed within a sun ("Twin Destinies") – who did not perish while trying to reach Earth, but instead were flung far back in time.

Scott, Greer, Eli, Chloe, and Wray return to the planet. The two people they have encountered – named Jason and Ellie – take them to their settlement. They are not native to this planet but are the remnants of an exploratory team sent from Novus many years ago. They speculate that something must have happened to the Novus Stargate, making it impossible for them to return home. Jason and Ellie introduce the village leader – Yaozu, an older man who bears the name of Camille's father.

Stranded for 30 years, there are approximately one hundred people in Yaozu's community, as well as several other settlements. When they left their home Novus was experiencing natural disasters, perhaps related to a rogue black hole – hence the search for other viable planets to support the evacuation of their civilization. Political tensions on Novus prompted people to split up. One group lived in a country called Tenara, which in Ancient means "the Land of Young." The other group, originally led by Brody, lived in "Futura." They blamed Eli for their presence on Novus and believed that Rush and Destiny would one day come to rescue them.

Eli is given a databank with a copy of the early kino footage from the first generation of the Novus settlement – a visual record of the path not taken. 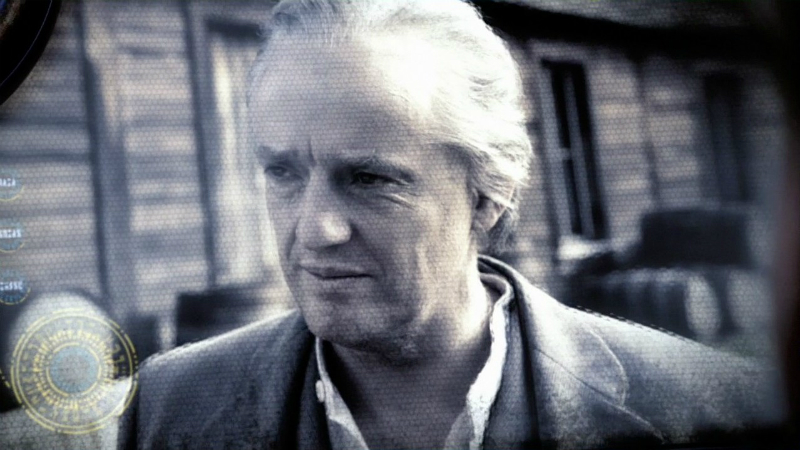 While the colonists help to gather supplies for Destiny, Wray takes Yaozu, Jason, and Ellie on a tour of the ship. Yaozu asks if Destiny will take them back to Novus. Even though Novus is only a week away, Destiny cannot hold all the colonists. Eli calculates that with so many people on board they would only barely make it using the supplies from the planet. But there would be nothing in reserve for any emergency. And there is still the drone problem.

Faced with this dilemma, Young decides to leave the colonists on the planet. Destiny will, however, visit Novus to help fix their Stargate so that the colonists can be rescued by their people.

As Wray and Eli convey Young's decision, though, drones arrive and enter the planet's atmosphere, strafing Yaozu's community. Scott dials the Stargate and shepherds as many people as he can on board Destiny. Destiny, too, has come under attack. Scott, Greer, Eli, and Wray are stranded when one of the drones destroys a segment of the Stargate. With the Gate suddenly un-dialable, Colonel Young must order Destiny to jump to F.T.L. flight and leave them behind.

With their long-range transmitters and generators destroyed, Jason goes to warn the other settlements on the planet. When the drones finally leave, there is no way to inform Destiny that it is safe to return. After careful thought, Eli realizes that it is the Stargate's active wormhole, a massive subspace event, that is allowing the enemy command ship to find them.

On Destiny, Rush also finally understands how their position is being repeatedly compromised. They are safe while in F.T.L. flight, and can use the shuttles rather than the Stargate to re-supply when stopping in planetary systems. Even so, Colonel Young won't risk returning to the colonists' planet. 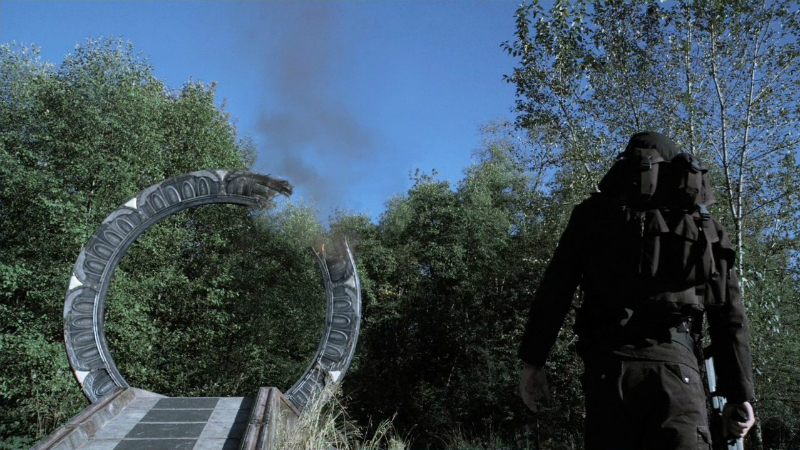 Trying to communicate with Destiny, Eli tinkers with the Stargate's own short-range, sub-space transmitter. Lt. Scott worries it might alert drones, but Eli is confident that the signal isn't that powerful. And all he has figured out is how to turn the signal on and off. Scott uses that to send a Morse Code S.O.S. Not far away, Destiny picks up the signal, and Young – convinced that the coast is clear – orders a return to the planet. All the survivors are brought on board using the shuttles.

Destiny sets course for Novus and, once there, Matt flies a shuttle to the surface. Scans turn up layers of dust and ash as well as freezing temperatures – a result of extreme volcanism. The magnificent city they find is completely deserted. There are no signs of life, radioactivity, or EM signals.

The millions who lived in the city only 30 years ago have all disappeared.