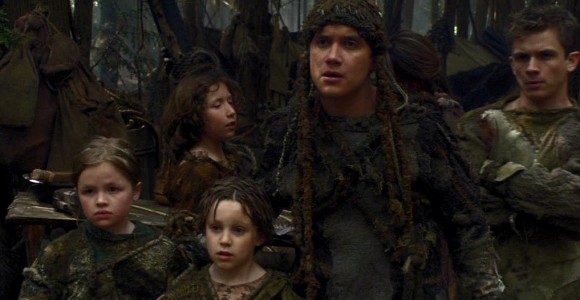 Sheppard and the team visit a world where no one is over 24 years old – because of a ritual suicide practice they believe keeps the Wraith at bay.

"Hey kiddies, everything you believe is wrong and trust us, because we've been here for almost an hour."
- Rodney McKay

More often than not, when SG teams go through the gate they meddle with the planet's culture and -- although accidentally -- put them in great danger. It looks like the Atlantis team is no different. In "Childhood's End," the "get new technology" directive of the Stargate program wreaks havoc with the strange peace that this society of children has had from the Wraith.

The episode is Martin Gero's first Stargate script as the new member of the writing staff, and the writing is a solid first showing, although I found myself hearing the same exposition echoed a couple of times more than necessary. There are a lot of little jokes that McKay says that I didn't catch on the first viewing. Turn away for a second and you would have missed his crack about the shield device running on an older version of Windows.

Gero must have also done his homework, because he makes sure that McKay is still McKay. He still has a thing for Carter, an elitist and arrogant attitude, and the ability to quickly fix the things he breaks. With Gero being new to the Stargate universe, my greatest fear was character assassination -- changing the personalities of a character in order to fit the story, especially with this character. Thankfully, even though McKay is now one of the heroes, "Childhood's End" shows that he's still, well, McKay. That's why little children love him.

I fear that Teyla, who doesn't seem to be allowed to speak with contractions at all, will become what Teal'c was in earlier seasons: the person who gets all the stating-the-obvious lines because the writers were too busy giving the other characters witty things to say. She has the potential to be a great character, solely by the fact that she knows more about the Pegasus Galaxy than any other member of the Atlantis team. That's somewhat shown in this episode, when she immediately objects to the removal of the Z.P.M. But in an off-world team episode like this, she doesn't seem to have much to do.

Keras and Ares, the two village elders, seem to represent the two sides of this culture. It's fitting that Ares is the name of the Greek god of war, as the character jumps to the warpath faster than the Atlantis team manages to screw things up. The idea of a "forced sacrifice," mentioned while Ares is talking to the female elder, hints that there's something a little darker going on in the huts of these villages. I would like to have known more about these people other than their strange sacrifice. But the ending of "Childhood's End" sets up the possibility of new stories, although doubtful now that the shield is back online and will stay there for quite a while.

There are some nice wide shots, especially the one of the Puddle Jumper about to crash, as it disappears behind the trees. Director David Winning (also his first time working on Stargate) makes some interesting connections between the shots of the village and the close-ups on the characters. Although I know they were supposed to be the guards, the complex eye make-up on the faces of the village children looked like it was just there to make them look more "native" -- especially when they weren't aiming arrows. Spare me the "Lord of the Flies" references.

I wonder how this episode would have turned out if the Z.P.M. could have been used in Atlantis, and had enough power to connect a wormhole back to the S.G.C. Stargate has always wrestled with gray areas. And "Childhood's End" touches on the issue of the combination of exploration and self-interest, but then pulls back, complete with a techno-babble explanation. Instead of a moral conundrum with the culture versus their safety, the episode changes to focus simply on how the team is going to fix what they've broken. It's a missed opportunity for this new series to prove its dramatic potential.

Otherwise, the episode does well in what it set out to do. There's a minor twist in the plot when we realize that the suicides aren't entirely meaningless, which I didn't see coming. It is a nice touch to show the viewers that we shouldn't assume certain things in this show. Overall, "Childhood's End" is a solid episode, but I feel like we missed out on a storyline that could have been great.