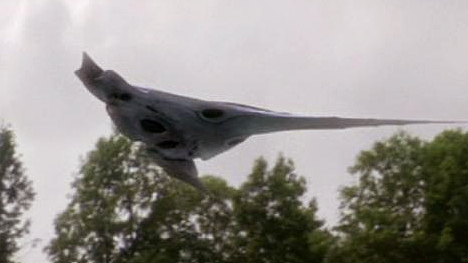 Small, ear-splitting interceptor craft piloted by a single Wraith pilot. Each craft is capable of incredible speeds, and can travel from world to world through Stargates. Darts discharge the same blue paralyzing beams as that of standard Wraith stunner rifles. Wraith hive ships are equipped with tremendous numbers of the fighter craft.

The Wraith Dart can make its presence known by the way it sounds -- a deafening, high-pitched noise as it races by. It is equipped with a culling beam that transports targets to the ship and saves them in an on-board energy storage device -- to be returned to the hive ship for consumption by the hungry species.

Rising, Part 1 - While the Atlantis team meets with the Athosians, three Wraith Darts arrive on Athos to cull the herd.
Rising, Part 2 - The team's Puddle Jumper must pass a fleet of Darts to escape through the Stargate.
Childhood's End - Sheppard's team finds that an electro-magnetic shield downed a Wraith Dart on an aliend world long ago.
The Siege, Part 2 - Waves of Wraith Darts pelt the city of Atlantis en masse.
The Siege, Part 3 - With their motherships destroyed by Daedalus, the remaining Wraith Darts in Lantean orbit sink into the atmosphere for a kamikaze run on the city, but are destroyed upon impact with Atlantis's shield.
Runner - Lieutenant Ford allows a Dart to scoop him up into its culling beam as his last resort in escaping from Colonel Sheppard.
Duet - A lone Dart uses its culling beam to pick up Dr. McKay and Lieutenant Cadman, but it is shot down before it can escape through the Stargate.
The Lost Boys - Ford's coalition acquires a Wraith Dart, which they use to infiltrate a Wraith hive ship.
The Hive - Sheppard becomes more experienced at piloting a Wraith Dart, and uses one to force distrust between two Wraith Queens to eventually lead to the destruction of two hive ships.
Sateda - A powerful Wraith commander transports both Ronon and himself to the surface of Sateda using a Dart's culling beam.
Search and Rescue - Sheppard uses a Dart to escape Michael's hive ship, bringing along his team in the transporter buffer -- with the exception of Teyla's newborn baby.
Enemy At the Gate - A wave of Wraith Darts engage F-302 fighters in Earth's atmosphere as the Wraith attack Earth, and succeed in destroying the Ancient weapons platform in Area 51 with a kamikaze run.