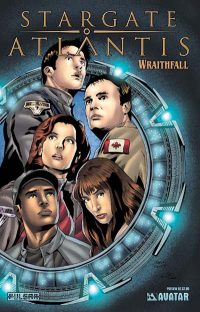 The Atlantis team encounters the Karrans, a primitive race that has made a bizarre deal with the Wraith.

Don't miss this special look at this summer's biggest licensed comic book launch! This special limited edition preview offers a behind-the-scenes look at the creation of the new Stargate Atlantis comic and the first series, Wraithfall! The new top-rated SciFi Channel series comes to comics! Stationed thousands of light-years from Earth, the team from Stargate Atlantis has a whole new galaxy to explore ... but most of those worlds are under siege by the Wraith, an ancient and deadly vampire-race. In Wraithfall, the Atlantis team meets the Karrans, a primitive race that has made a bizarre deal with the Wraith. Major Sheppard is determined to stop the Wraith at any cost ... but can he do it without destroying the Karrans' lives? From Avatar Press