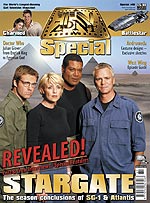 TV Zone magazine will publish another all-Stargate issue of its popular genre magazine next week! The extra-large, 132-page Special Issue #61 will cover Stargate SG-1 and Stargate Atlantis through the end of the current seasons.

The magazine also goes behind the scenes of episodes from the second half of SG-1‘s eighth season with photos, concept art, and more. A special feature article will look at sci-fi shows with actors crossing over, including Ben Browder’s leap from Farscape to Stargate SG-1 next season.

The issue will include shorter features on Battlestar Galactica, Andromeda, Doctor Who, Charmed, and others.

The special issue isn’t the only coverage the magazine has been giving Stargate in recent weeks. Special Issue #60 (now available) features Claudia Black (“Vala”) and the Stargate on the cover, and interviews the actress about her appearance in Season Eight’s “Prometheus Unbound.” The issue — TV Zone’s 2004 yearbook — also features episode highlights from the SG-1 and Atlantis episodes broadcast last year.

Executive producer Michael Greenburg talks about Season Eight and what’s still to come in TV Zone’s regular issue #185 (February 2005), which features the SG-1 team on the cover. One episode he talks about is “Full Alert,” which sees Ronny Cox return as former Vice President Kinsey. “This story is sort of a sci-fi mystery about who is trying to get two nations on Earth worked up to such a fevered pitch that they might blow each other up and the planet as well,” Greenburg said. “Obviously, we’ve made plenty of enemies over the years, and one of them is masterminding this global plot.”

Look for these issues on newsstands now and the brand new TV Zone Special #61 starting January 20 — or order online from Visual Imaginations! In the U.S., retailers like Borders or Barnes & Noble are a good place to hunt.