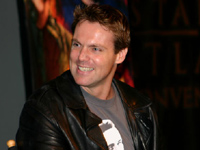 Stargate SG-1 co-star Michael Shanks arrived on stage to a cheering crowd at Creation’s Official Stargate SG-1 / Stargate Atlantis Convention in Vancouver today. After posing with fans for photos late in the afternoon, the Daniel Jackson actor took to the stage of the crowed auditorium to talk with fans and answer questions.Michael began his time by giving away copies of the new “Women of Sci-Fi” calendar and behind-the-scenes DVD, autographed by himself, photographer Chris Judge (“Teal’c”), and model Lexa Doig (“Carolyn Lam”). Shanks produced the 2007 calendar, which is now available in specialty shops and online at WomenOfSci-Fi.com.The give-aways were “in lieu of cigars,” as Michael announced that his wife Lexa gave birth to their first son six days ago: Samuel David Shanks. “He looks like his dad,” Shanks said, “… and he acts like his dad, because he’s either asleep or he’s crying.”Michael then took questions from the audience, speaking about narrating the book “Local Custom,” and voicing the Asgard Thor. He joked that, while the alien character started off sounding like HAL from “2001,” in later years he evolved into the more pointed mannerisms of Stewie from Family Guy. And while he started as a one-off character in Season Two’s “Thor’s Chariot,” by Season Six (“Unnatural Selection”) Thor was “monologue guy.”

Thor, alas, was replaced in Season Nine with a new Asgard character, Kvasir. “You can thank Kvasir for Thor’s now drinking problem,” Michael joked.When asked about the discipline of acting and memorizing lines, Michael confessed that it has become more difficult to memorize long passages of dialogue as the years have gone by.What TV shows does the actor watch, when he has the time? With three kids, he confessed, “I’m watching a lot of Dora these days.” Michael said that he finds himself singing songs from animated children’s show Dora the Explorer when he’s alone in the car, and even sang one on stage to prove it.Finally, Michael was asked if he would like to see a Canadian team join Stargate Command on the show. “They’d go through the gate and aplogize to everybody,” he joked. “I’ve actually thought of Daniel as the honorary Canadian on the U.S. team,” always apologizing for the brashness of Colonel O’Neill when visiting other worlds.Following his 45 minutes on stage Shanks signed autographs for eager fans, and was scheduled to appear later that night at the convention’s dessert party and dance.Photos by kiwigater. Special thanks to blingaway.