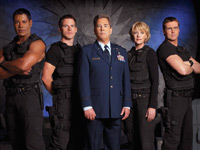 Everything is set to start filming April 15, 2007 for the first of two new Stargate SG-1 movies, according to Michael Shanks (“Daniel Jackson”). In an interview with IGN.com, Shanks gave up some details on the plots of the movies.

Watch out for spoilers in the story below!

According to Shanks, the cast is all signed up for both movies. Executive producer Robert C. Cooper will both write and direct the first movie. The storyline “has to do with wrapping up the Ori storyline, which is the storyline that has taken prominence for the last two years of the show,” Shanks said. “I don’t know if [Cooper] is going to wrap it up completely or bring it to some conclusion for the sake of the fans and the franchise, to bring that epic struggle to a close.”

The second movie starts shooting June 1. Executive producer Brad Wright will write the second film, with Martin Wood directing. That story is a time travel story taking SG-1 to the past. “[It] has something to do with our main mustache twiddling villain Baal [Cliff Simon] doing something in the past,” Shanks said. “He basically finds a way to lift the Stargate from Earth so the Stargate Program never happens, and I imagine the characters will have to go through some process to reset the clock and fix everything.”

Shanks also discussed the second half of Season Ten, saying that Daniel has his hands full with an unexpected detour.

“Something happens to Daniel that sends him on a strange journey,” he said. “So that was kind of fun to play. You get to see the darker side of Daniel and play with that portion of the latter half of the season … he comes back and is kind of a villain.”

“I haven’t been spoken to about anything to do with Atlantis, so I guess Daniel will have to wait.”

(Thanks to nate and tsaxlady for the tip)