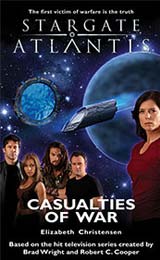 A new Stargate Atlantis novel has been released from Fandemonium! “Casualties of War” is the latest addition to the line of Atlantis novels, and brings the Pegasus Replicators (introduced in Season Three’s “Progeny”) into the fore.

Here’s what the publisher has to say about the story:

It’s a dark time for Atlantis. Following the first Asuran clashes, Colonel Sheppard is buckling under the strain of command. When his team discovers Ancient technology which can defeat the Asuran menace, he is determined that Atlantis must possess it — at all costs.

But the involvement of Atlantis heightens local suspicions and brings two peoples to the point of war. Elizabeth Weir believes only her negotiating skills can hope to prevent the carnage, but when her diplomatic mission is attacked — and two of Sheppard’s team are lost — both Weir and Sheppard must question their decisions. And their abilities to command.

As the first shots are fired, the Atlantis team must find a way to end the conflict — or live with the blood of innocents on their hands …

“Stargate Atlantis: Casualties of War” is author Elizabeth Christensen’s first Stargate novel without fellow collaborator Sonny Whitelaw. She has previously co-authored Atlantis novels “The Chosen” and “Exogenesis.” The two authors will again join forces for “Blood Ties,” to be released later this year.

“Casualties of War” is available in the United States and United Kingdom. Order it now at Amazon.com or Amazon.co.uk and support GateWorld with your purchase. The book can also be found at the publisher’s official Web site, StargateNovels.com.

Don’t forget, you can talk with Elizabeth Christensen and Sonny Whitelaw yourself! They’re taking your questions now at GateWorld Forum. Meanwhile, more Stargate SG-1 and Stargate Atlantis novels can be found in GateWorld’s complete Books section.