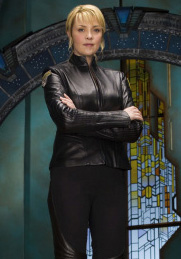 Beware of SPOILERS for the fourth season of Stargate Atlantis below.

Fans are eagerly anticipating the premiere of Stargate Atlantis Season Four, soon to be arriving on U.S. doorsteps. As one series regular departs, we will be receiving a familiar SG-1 face into the city of Atlantis. Full-bird Colonel Samantha Carter will take command early in the new year.

Amanda Tapping and David Hewlett, recently interviewed at San Diego Comic Con, had the opportunity to discuss these changes, and didn’t fail to remind us that some things will stay the same.

“My role has changed dramatically,” Tapping tells SCI FI Pulse. “She went in with a lot of trepidation about how to handle the situation and how to handle the fact that they were losing a leader who was much loved.” Elizabeth Weir will be departing for her own storyline early in Season Four.

“In terms of her scientific knowledge she defers to McKay and allows him to shine,” she says. “She defers to Sheppard in terms of the military knowledge of the Wraith. I feel like I’m playing an entirely different character in a lot of different ways.”

The rivalry between Carter and McKay, present since SG-1‘s “48 Hours” when Rodney was introduced, will not be limited to the other show. “They’re both incredibly intelligent people and that intelligence breeds a certain amount of ego. And in the case of McKay, if I may say, that ego is way out of control. There’s almost a sibling rivalry between the two of them.”

“We work against each other very well,” adds Hewlett. “We’re the yin and yang of sci fi.”

Many Atlantis and Weir fans are not necessarily welcoming the change from one leader to another. Tapping says she is aware of this, and admits the pressure is on for her to do her job well.

“I have a huge amount of pressure to prove myself to the Atlantis fans,” she says. “I’ll step up my game.’ Stargate Atlantis survived perfectly well for three years without my intervention, thank you very much.”

But it’s not all trepidation. Amanda fully intends to have fun. “I’m thrilled to move over. I love the cast and I love the crew and I love the atmosphere there. Honestly it’s a great move for me personally, and for my character, but I am painfully aware that I have a lot to prove.”

View the six minute video at SCI FI Pulse, complete with fan-asked questions and nuggets of scenes from Season Four! The new season of Stargate Atlantis premieres on the SCI FI Channel on Friday, September 28 in the United States.