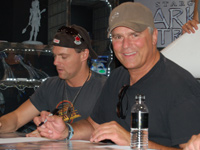 The stars of Stargate: Continuum and Stargate Atlantis were out in force at this week’s San Diego Comic-Con, and GateWorld’s David Read was there with them every step of the way. Thanks to our friends at MGM and Fox Home Entertainment, GateWorld had exclusive, up-close access at the Continuum red carpet premiere, all three Stargate panels, and the cast autograph sessions at the big Stargate booth on the convention floor!

Jump right into the action with two exclusive photo galleries: The Continuum premiere on board the U.S.S. Midway, and Comic-Con itself. Together, these galleries have more than 300 high-resolution photos of the cast, crew, and fans of Stargate!

Stargate’s big weekend started on Thursday night, as the cast assembled before a crowd of reporters on the red carpet for the premiere of Stargate: Continuum. The new movie arrives in stores this coming week, but these lucky fans got to watch it on a big screen on the flight deck of the U.S.S. Midway (a retired Navy vessel that now serves as a museum and educational destination).

Wright reportedly told the crowd that MGM wants both a third DVD movie and the third television series, Stargate Universe, to move forward. Deals are reportedly very close, but nothing has yet been made official.

“We’re very close,” Wright told GateWorld when we contacted him for further comment. “[That’s] all I can tell ya.”

With the Continuum panel over, the cast waved goodbye and made room for Stargate Worlds. The creators of the upcoming MMO-RPG video game showed off new footage, answered fan questions, and had a playable demo on the convention floor.

In spite of the impending news on Stargate Universe, Wright reportedly said that they weren’t done with Atlantis yet.

After the stage panels the actors headed to the very impressive Stargate booth on the convention floor to meet and sign autographs for hundreds of fans. It was a rare convention appearance and the first Comic-Con for Anderson, who has usually kept a low public profile during his years on Stargate.

Don’t miss these complete photo galleries, now at the Stargate Image Gallery! The Continuum premiere is filed under the new Cast Appearances section, while the Comic-Con events are under Conventions. 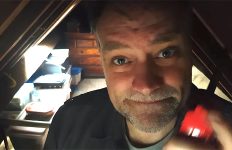