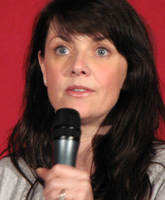 Amanda Tapping is lending her name in a charity auction to raise funds for North Star Montessori Elementary School in Vancouver, BC.

“Amanda has always been a champion of charitable and good causes,” the organizers told GateWorld. “She has a particular interest in lesser-known causes which ordinarily have no access to mainstream fundraising. This is a small local school that could really use the support.”

Items being auctioned include a 20-minute Skype chat with Amanda (link), an autographed arm sling worn by Tapping in SG-1 (link), and a guided behind the scenes set visit and lunch with Tapping during the filming of Sanctuary in Vancouver (link).

“This auction will serve as a template for a larger fundraising initiative that Amanda plans to launch later this year, which will support children’s charities and not-for-profit organizations,” they said.

chatting with Amanda would be great, but i wonder how many minutes will the chat last before it starts to sound creep.

The Set Tour and Lunch on Sanctuary Set sounds cool and you can bring 3 friends with you, also the Autographed Sling is signed by almost all stargate characters.

This is hardly breaking news, i read this same news announcement on the 25th january at the stargate archive

What an amazing person Amanda is! How utterly selfless she is! She never fails to impress me! If only more people could follow her example…what a far better world this would be.

Way to go Amanda. What a wonderful thing to do. She is always amazing.

aduk85 — You are the administrator for Stargate Archive. We haven’t forgotten that you are.

WTG Amanda!! If only I had the money to bid. :D