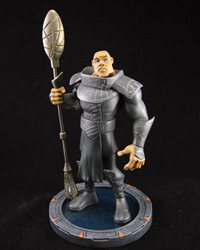 New Stargate licensee Quantum Mechanix has unveiled the first of a brand new product line for our favorite characters! The first SG-1 animated maquette is now in development at the studio — Teal’c, circa 1997’s series premiere “Children of the Gods.”

What is a maquette? French for “scale model,” the concept originally came from physical models sculpted to see how 3D, computer-generated models would look before they are fully rendered. “The term was adopted by collectibles developers to describe cartoon (animated) interpretations of ‘real life’ screen characters,” QMx president Andy Gore said.

The statue is hand-painted resin and stand over 9-inches tall (including Teal’c’s staff weapon). Teal’c is limited to a production run of just 1,000.

Gore announced the maquette on the “Ask Quantum Mechanix” thread exclusively at GateWorld Forum. Look for more (and bigger!) photos there, at post #133.

“Teal’c is the first in a line of animated maquettes inspired by the heroes (and villains) of Stargate,” Gore said — indicating the strong possibility of additional characters, both good guys and bad guys, in the future. He added that Daniel Jackson is up next, “currently in an action pose with a pistol in one hand and a book of ancient knowledge in the other, circa Season Five-ish.”

Pricing is still to be determined, but Gore said that it should come in “well under $100.” 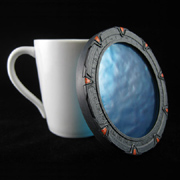 The company also recently announced the first, officially-licensed Stargate coasters — made from the same cast as the maquette stand pictured above. The coasters measure 4.57 inches (11.6cm) across. QMx will be selling sets of four for $29.95 (U.S.), and they should be available from their Web site next week.

“The Stargate design is exactly screen-accurate and was taken from the CGI files used to create the visual effects for Stargate SG-1,” according to the Web site’s product description. “Each glyph and chevron is perfectly reproduced, hand-cast in resin and hand-painted with a detailed paint job and weathering. The event horizon is semi-transparent blue with a rippled surface.”

Pick them up at QuantumMechanix.com this month, and watch for more details on the Stargate animated maquettes soon!

(Thanks to SGAsgard and Morjana for contributing)

Why Cartoon style? Who want to buy that? I prefer good looking figures like SideShow. Too bad they don’t have a Stargate license.

Bah! I’m still waiting for quality stargate merchandise, and the micromachine models of the Daedalus and every other Stargate ship.

Who would want an (active) Stargate for a coaster? I mean your drink will just demolecularize at the atomic level and be sent flying out through another coaster at drench some unsuspecting Jaffa or Unas, or worse, a GateWorld moderator.

OMG, JoshuaJSlone!! LOL!! I was wondering why that looked so familiar (cuz at first glance it so does not look like Teal’c)!! He totally looks like a Sontaran! I think its the neck collar thing… and the baldness. LOL. =)

The coasters are only accurate when you look at them from the front (or from top-down in the case of when they are on tables). Its too bad that they are not accurate from the back. I suppose thats because they are not meant as models but built in a way to support cubs, mugs etc. Shame really because I’ve been hoping to get a small perfectly screen accurate stargate model. The mirror stargate is too big for my liking. And that Tea’c statue looks creepy. Come on MGM. Stop messing about and give the stargate merchandise rights to McFarlane… Read more »