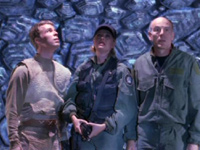 The complete second season of Stargate SG-1 is now available to watching online at Hulu.com, free and with limited commercial interruptions! The site has released all 22 episodes from the show’s 1998-1999 season, including fan favorites like “Thor’s Chariot,” “The Fifth Race” and “1969.”

Check out a sample episode below — another one of our favorites, “In the Line of Duty.” Episodes are available in both 360p and 480p resolutions.

Hulu viewing is only open to U.S. residents, since film and television distribution rights differ from country to country.

Season One is also still available to watch on the site, and there’s no indication yet as to whether it will come down soon — or if Hulu will provide access to many seasons (or even the entire series) at a time. The third season of SG-1 should be available in May, as Hulu releases all ten seasons of the show to count down to the fall premiere of Stargate Universe.

(Thanks to Morjana, Aaron, Iamjohn, Charles K., Neima, Mrja84 and Avi for the tip)

What the heck? They’re all 4:3 cropped. The preview image is correct at 16:9, but the videos are cropped, every last one of them.

SG-1 has never been aired as pan & scan, what the heck is going on here?

Hmm. The show aired in 4:3 for its first five years, IIRC. Hulu probably received the original syndication copies of the episodes for encoding. That’s my best guess, anyway.

Yeah I was curious too as to why these are in 4:3 other shows in Hulu such as The Office and Atlantis are in 16X9. Speaking of, it ticks me off that Sci-Fi HD doesn’t show SG-1 in widescreen, letterbox+pan and scan on a wide screen TV is so annoying. Its not like they don’t have at least a standard def wide screen version as all the SG-1 DVDs are in wide screen.