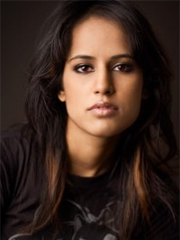 Amanda Tapping’s hit new fantasy series Sanctuary has begun principal photography on its second season, SCI FI Channel announced today. The new season will premiere this fall on the U.S. cable network, and is expected to air alongside Stargate Universe.

The show has been shooting for about two weeks now, and the cast and crew were working on the second half of the two-part season opener when GateWorld visited the set last week. The premiere is being directed by Martin Wood.

Joining the cast for the second season is actress Agam Darshi, who played Novo in the recent Stargate Atlantis episode “Outsiders” and an Athosian in Season One’s “Suspicion,” according to IMDb. Darshi (who hails from Birmingham, U.K.) will play Kate Freelander, described by the network as “a swindler, con artist and thief who finds herself in an uneasy alliance with Dr. Magnus after her business relationship with the Cabal goes sour.”

“There’s a level of confidence this year,” Robbins told GateWorld, “because the show has done so well. I think there’s a willingness to take some risks. Man, it’s action-packed this year. I love the scripts.”

The show also adds to its staff of writers this year, including Alan McCullough, who has moved over from Stargate Atlantis.

Sanctuary was created by former SG-1 scribe Damian Kindler, who also executive produces with Tapping and Wood. Season One writer-producer Sam Egan has left the show this year, and Andrea Gorfolova, Carrie Mudd and Keith Beedie are now listed as executive producers.

Ryan’s in the main cast?! WOOHOO!!!!
FINALLY!! He totally deserves it!

Thank you, Gateworld, for all the updates!

I wish this series was shown in here!

Wicked. I look forward to the new series. And Agam Darshi is hot.

ugh.. i want to like this show but it’s SO BAD. it’s the cheesiest thing I’ve ever watched in a long time. but I guess stargate atlantis fans are used to bad writing.

awesome that new chick is in snakes on a plane, therefore she is the greatest actor in the world.

Yay! About time Robbins got his name onto the main credites… He’s probably had more air time than one or two of the main cast. Hopefully, like in SG tradition they don’t make him a series regular then kill him off!

sounds like an interesting addition to the cast (kate), but she also sounds very close to the vala character of sg1. let’s just hope (for my sake) that she’s nothing like vala and is actually written with some depth. again, this is just my opinion.