Browse: Home / 2009 / May / Screen Capture Gallery: Timeline to the Future 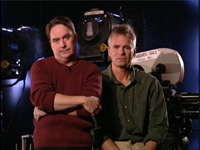 More than 850 images have been added to the GateWorld Gallery this Monday, May 18! This week we are featuring screenshots for the three SG-1 “Timeline to the Future” documentaries.

Only Part One of this trilogy was released to Region 1 DVD when the features were created. The final two were held back until the Complete Series was released, so we are including it in this section. Look below for a link to each gallery and a breakdown of what lies within!

Timeline to the Future Part 3 (360 images) – This documentary focuses on the fans and includes a host of moments from the Gatecon 2000 Vancouver convention, and interviews with actors Peter Williams, Tony Amendola and Teryl Rothery. Also interviewed is Tom Giannazzo, Master Sergeant U.S. Air Force, who served as a consultant. Plus much more!

Keep your mouse pointed to GateWorld every Monday for tons of new images from Stargate’s DVD special features!