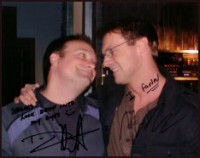 The annual auction of Stargate and other science fiction memorabilia hosted by Michael Shanks Online has begun!

Proceeds from the series of auctions from the actor’s official Web site go to benefit the Multiple Sclerosis Society Canada, the preferred charity of Shanks (SG-1‘s Daniel Jackson) and his wife, Lexa Doig (“Carolyn Lam”).

Highlights from this year’s auction include:

This is the fifth annual auction hosted by the site, with the last four auctions raising more than $81,000 for the charity.

New items are being added every day for the next week, so keep your eyes on MSOL and ebay for the latest. Visit Michael Shanks Online to learn more, and start bidding today!

These auctions are so good!…pity I have no money at the moment but love seeing the items…

Fab things up for grabs. Already have won 2 actions :)

Some great stuff here. Just wish I had more money.