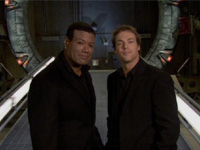 The GateWorld Gallery is in full screen-capture swing for DVD special features!

Two of the three features originally aired on the SCI FI Channel during SG-1‘s final season. The breakdown for each of the new galleries follows.

200th Episode Featurette (SCI FI Inside) (1,278 images) – Follows the adventures of Gary Jones (“Walter Harriman”) as he tries to work, buy and bribe his way into scenes for “200,” and includes interviews with just about every member of the cast, as well as countless crew, during the production of the episode and press junket.

Expect a brand new series of screenshots to continue to be added to the GateWorld gallery every Monday!