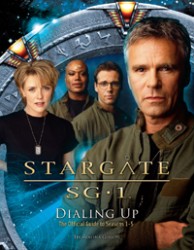 Titan Books, the official publisher of all things Stargate non-fiction, has announced plans to publish Stargate SG-1: Dialing Up – The Official Guide to Seasons 1-5. The new book is due out on September 22, and (considering the show ran ten seasons) ought to be the first in a 2-volume set.

Written by Thomasina Gibson, the book will include content drawn from the first three volumes of Titan’s popular Stargate SG-1: The Illustrated Companion series, including photos, interviews, an episode guide, and contributions from cast members such as Richard Dean Anderson.

Unlike the Illustrated Companions, though, Dialing Up will be printed in full-color.

The original six black-and-white volumes were published during SG-1‘s television run, with the first four covering two seasons each, and individual volumes for Seasons Nine and Ten.

Hmm. Looks like it covers five seasons in about the same number of pages each “Illustrated Companion” book used to cover either one or two, so this can only keep a fraction of the old content. Well, unless they shrink everything.