Gatecon is one of the few events to get Richard Dean Anderson on stage.

GW: Financial concerns aside, does the core group of organizers not want to do it anymore? If so, has there been any discussion about passing it on to new blood?

AG: It has come to a time where one of the core organizers wishes to retire from doing conventions, and simply concentrate on family life (no, before you ask, it’s not me!). That then leaves us with only two of the original four organizers that started Gatecon back in 1998 (with our first con in 2000). Sue Seeley retired after the 2005 convention, and since then Fryn Rogers, Richard Pasco and myself have been the core owners and organizers of Gatecon.

With one retiring at the end of Gatecon 2010, the organization of a convention such as Gatecon simply can’t be run by two people alone.

GW: You said you hope that Gatecon will always exist in some form. Is there a future incarnation of Gatecon that could still be in the cards?

AG: Well, it’s not something that we are worrying too much about at the moment. We have a convention to organize for 2010, and with Christmas upon us, we will wait till next year to even start thinking about what the future of Gatecon might be.

There may be a possibility that the remaining two organizers will stay on and enlist the help of some key staff to help organize another convention. But I can’t speak for the other organizer, and I don’t know what their final decision will be come next year.

Conventions will always be in his blood, Gowen says.

But speaking personally, conventions are in my blood now. It’s an addiction I can’t shake! I would love to continue doing conventions in some form.

GW: Is there no more room in a crowded market for the little guy?

AG: You can never discount the value of the “little guy.” It’s the fan-run conventions that drive the industry, and in Gatecon’s case, set the standard for other conventions. Fan-run conventions will always be in the forefront of any fan’s event calendar because of the more relaxed atmosphere and accessibility to the guests. And, let’s face it … fans know how to party! Fan-run events will always be a better alternative to the commercial ventures.

Sure, the global financial crisis and other unforeseen circumstances hurt the fan-run events more. But things change, things get better. It’s just a matter of time before things are good again.

NEXT: Studio and licensing challenges 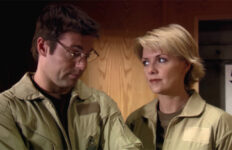