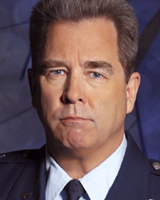 What’s old is new again in the television landscape. Proof of that lies no further than the CBS network, who are prepping an updated version of Hawaii Five-O to premiere later this fall.  But further proof lies in another television drama remake scheduled for NBC this fall — and this one comes complete with a familiar face for Stargate fans.

The Hollywood Reporter broke the news recently that Beau Bridges (“General Hank Landry”) has been tapped to co-star in an updated version of The Rockford Files.  Bridges will play “Rocky,” the father of the main character, private detective Jim Rockford.  The character is described in the report as a “truck driver for thirty years who always helps his son in a tough situation, though he tends to offer a commentary that Jim doesn’t always appreciate.”

The original Rockford Files also ran on NBC from 1974 to 1980, with actor James Garner as the lead.  Dermot Mulroney (My Best Friend’s Wedding) has been cast in the role for the remake.

The series also marks Bridges’ return to NBC, after having earned an Emmy nomination for his recurring turns as Earl’s father on My Name Is Earl.

Some career move, SGC General to truck driver. Likable actor. Just hope he’s available for those movies in the future. ;-)

Wow, i wish him good luck.

Congrats to Beau!
(I thought Joe Flanigan would have made an excellent Rockford, never heard of Mulroney!)

I wish Beau luck. We all know how remakes go! How about some original programming instead of remaking shows that were fantastic in there time.

Not a big fan of remakes, but at least it gives Beau a platform to showcase his great acting. The original Rockford Files was an old 3am favorite of mine, so I’ll give it til mid-season to really wow me.