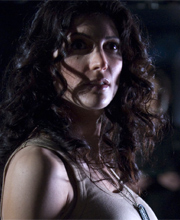 One of our favorite supporting characters from the first season of Stargate Universe is 2nd Lt. Vanessa James, occasional SG team leader for Destiny and jilted former lover of Matthew Scott.  Actress Julia Benson brings not just beauty to the role, but also a great strength of character.

In a new Q&A with fans at executive producer Joseph Mallozzi’s blog, Benson talks about her work on the show, the growth of her character, and her favorite episode of Season Two so far. Among many other insights, she reveals that she originally auditioned for the role of Andrea Palmer, and was also considered for the role of Sgt. Riley.

“So far in Season Two ‘Malice’ would be my favorite episode,” she said. “It was written and directed by Robert Cooper and we just finished shooting this week. I think that the fans will love it because there are high stakes and lots of good action. There is also some great stuff between Rush and Simeon [guest star Robert Knepper]. When two actors like that get to square off it is explosive.

“I also got to do a fun stunt, which I love, so maybe I am biased!”

SGU‘s second season premieres in October, and is nearing the halfway mark for filming.

Benson won a Leo Award for her performance in "Pain."

One central storyline for James this season has been her relationship with Lt. Scott (Brian J. Smith), who unceremoniously dumped her for Chloe Armstrong in the show’s first episode. As later revealed, James had serious feelings for the young officer.

“Regardless of what the exchange was for Scott, James developed feelings for him,” the actress said, alluding to their closet sexual encounter in “Air, Part 1.” “It would obviously be different if his relationship with Chloe wasn’t in her face constantly.”

“I agree that she is self-reliant and confident, but people are different in love. James has been burnt by the whole Scott/Chloe situation and to top it off, she has to live in very tight quarters with them. I think she will get over it, but it may take some time.”

“In Season One we saw James struggle to find her place on the Destiny,” Benson said. “She definitely started to break down with the loneliness and isolation. Hopefully in Season Two she gets to keep developing her strength.”

Check out Joe Mallozzi’s blog for the full Q&A!  There’s much, much more from Julia, including comments on her Leo Award-winning performance in “Pain.” Visit Julia’s official Web site at JuliaBensonOnline.com, and follow her on Twitter!

Didn’t realize she had won an award for her performance in Pain. Well deserved!

I definitely recommend checking out that Q&A everyone! It makes for great reading!

Congratulations to Julia Benson on her award for “Pain”! Well done and very well deserved!

I hope she gets a lot more character development in season 2. I always hated how she was mostly portrayed as just a “badass with a nice rack” in season 1.

if they shot her up to a lead character, i’d prob start watching the show again.

She is a good character I agree. And, she was exceptional in PAIN. While I liked the first half season One of SGU, I thought it was amazing in the second half – esp the last 6 or 7 episodes. It seems as though there are a great many more interesting characters than there were all of the first part of the season. And, strangely enough, I’m less interested in either Col.Young or Rush than I am in all the rest. (Rush’s character is interesting only in that his choices are always so based on his own self – at… Read more »

I think she is the Major Lorne for SGU.

I know my husband likes her character. Wink wink.

But she is a good supporting actress

I dont even remember the break up between her and Scott (did it happen off camera or during a dialoge free scene?) Looking forward to seeing what the character does to deal with the fact that not only was she dumped, still has to work with Scott but also sees the person she was dumped for on a nearly dayily basis. I just hope they dont pull a crazy astro-nut woman who kidnapps Scott or Chloe.

All that appears is Scott banging her in the beginning of the pilot, and then nothing more.

I hate her as much as I hate Scott, because she loves to make fun of Eli. Even science fiction nowadays is showing how “cool” it is to bash the nerd.

I watched the first episodes, now I’m boycotting this series.

The one sad thing about the Stargate franchises, is they tend to not develop female characters nearly as much as the male ones. For example, I always liked Teryl Rothery’s character in SG-1, they FINALLY have her seeming to get some romance in a season 7 episode, I’m thinking, “finally we’re gonna find out more about her”, and… yea… she’s gone… Fantastic episode, but that’s when I realized they don’t really develop the female characters.

I just watched SGU again and it dawned on me – Dr. Kaine was a widower. Jacob Carter from SG1 was a widower. Has me wondering if one of the writers had lost his spouse. I guess because I’m a widower and my dad also lost my mom before he passed that I would notice this.