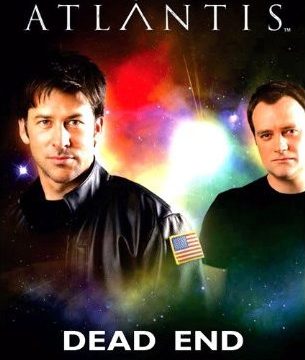 A simple exploration of an old lab in Atlantis leads first to danger, followed by questions after a distorted recording left behind from the Ancients is discovered.  Stargate coordinates to a planet the team dubs “Dead End” is the only place to find the answers they seek.

However, nothing prepared them for the events which take place both during transit through the wormhole, as well as upon their arrival.

“Dead End,” as John Sheppard’s team discovers, is a far more appropriate title than they’d realized.  Everyone’s endurance will be put to the test as they try to survive in one of the harshest climates of any world they’ve ever gated to — while back on Atlantis, Zelenka and Weir work tirelessly to find a way to bring them all back home.

Author Chris Wraight has some interesting ideas in what turned out to be a very enjoyable story.  His writing style is good, though I don’t personally remember Teyla or Ronon ever referring to the expedition as the “Tau’ri” in the show.  I thought that was a Jaffa term, not a Pegasus one.

That aside, Wraight gives Stargate fans a slick read.  Readers are thrown into the action right on the home front in Atlantis during the first few pages:

“Get out!” yelled Sheppard, darting back towards the door. The marines tore across the chamber. He just had time to see the last of his men slip through the gap before the wall section slammed shut in front of him. He was trapped inside.

The book keeps moving at a fast pace and never lets up. And we get to meet some likable new characters among the Forgotten. (Though, personally, I think one of them picked up on the concept of Ancient tech and the A.T.A. gene a little too quickly, considering the Forgotten’s heritage.)  And while I would have liked to see a couple more pages at the end, to finish it up, it was a solid story worthy of any Stargate Atlantis fan.

“Dead End” is a good book that leads us on a journey of mystery and endurance that is well worth taking. So grab a copy of the book and don’t get cold feet just because the team is “trapped on an icy world with no way out.”

Buy Now on Amazon.com!
Reviews represent the opinion of the author, and not necessarily that of GateWorld or its owner.

i got the book about 2 months ago, but haven’t read it yet, I think i will now.

Read it when I got it. Decent read, but I kept getting jarred out of the story by out of character moments that had me thinking “do you even know these characters?” (The Tau’ri thing being the worst but not the only offense). But it was a decent read. Better than some of the others, but not the best one to date.

thanks for the review. I’ve been thinking about picking up some startgate novels and i think i wont be. i really hate it when authors get things like that wrong. if your getting paid to do a job. you should do it properly

Picked it up yesterday with a bunch of other books.
I’ve got about ten books to get through before I start on any these though.