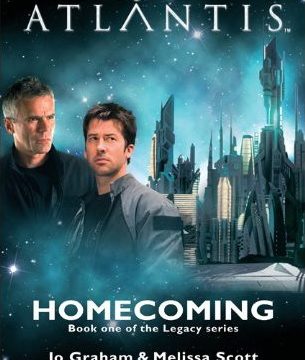 Jo Graham partners with Melissa Scott to launch the exciting six-book “Legacy” series that picks up the SGA storyline after the events of the Season Five finale.

Graham’s first novel, “Black Ships,” was published in 2008 by the Orbit Books and received both a starred review from Publisher’s Weekly and a nomination for Best First Novel of the Year from Locus Magazine. Her second novel, “Hand of Isis,” also received high praised by Kirkus Review.

Together they open the six-book series with “Stargate Atlantis: Homecoming,” to be published late 2010. The novel depicts a unified Wraith who have one goal: kidnapping Dr. Rodney McKay and stealing his hyperdrive secrets. Legacy will be the first multiple-book story arc published by Fandemonium.

Since Legacy follows the events of Season Five, Fandemonium promises to take “our favorite characters into brand new territory — which means that anything can happen, to anybody! The stakes have never been so high.”

The six Legacy titles are all slated for publication over the next two years:

Can’t wait for Legacy for your SGA fix? Fandemonium has you covered with two new standalone Atlantis titles.

In “Death Game,” written by Jo Graham, Sheppard and team find themselves in a perilous situation when they “wake up on an alien world, in the wreckage of a Puddle Jumper,” with no memory of how they got there. “Suffering from a serious head wound, John Sheppard slowly puts the pieces together and discovers that his team is scattered across a tropical archipelago, unable to communicate with each other and cut off from the Stargate. Badly injured, he and Teyla are taken prisoner by the local population and sent as tribute to the planet’s mysterious overlord. Meanwhile, Ronon, McKay, and Zelenka form an unlikely rescue team as they search the planet for their friends …”

“Brimstone” is co-authored by David Niall Wilson and Patricia Lee Macomber. Fandemonium describes the story as follows: “When a moon inexplicably leaves its planetary orbit for a collision course with its own sun, Rodney McKay’s interest is piqued. What he discovers is enough to make him dance, for an entire Ancient city – the size of Atlantis – is there for the taking. But the city is not as abandoned as he had first believed and the team soon encounter a sect of unascended Ancients living far beneath its surface …”

David Niall Wilson is the author of The DeChance Chronicles, a 5-book series following the exploits of Detective DeChance as his explore a vampiric world prone to magic and mystery. Patricia Lee Macomber’s work has previously appeared in the horror magazine Cemetery Dance and the anthology Joined At the Muse.

I agree with Jenks; I’d be interested if these were canon and truly carried on the story, although also somewhat saddened that any movie would then take place later (presumably after the novels).

But since they can do whatever with these novels and then do the movie as if the novels were never written, well ‘what’s the point’ I guess is how I feel about them. Maybe if the community gives them rave reviews I’ll still check them out, but unlikely.

Interested to see what the rest of the community thinks about this.

Can’t wait! The authors sound like they have a good handle on the characters, from what I’ve read and even if they aren’t canon, hopefully they will be enjoyable.
Evidently MGM approved them, so they at least won’t be too out of character or storyline.

I will read them; I like to think of the stories as what might be happening in a parallel universe – not canon, but entertaining nonetheless.

Awesome, can’t wait. I read these books like episodes.

novels??? that dont have anything to do with the story thats lame they need to stop making all this other crap and make the sg-1 movie and sga movie

Well, it has worked with Star Trek pretty well, so why not here.

Can’t wait. I’ve given up hope waiting for an SGA movie to ever be made.
I’ve enjoyed the Fandemonium books I’ve read so far. So canon or not I look forward to the continued adventures of the Atlantis crew.
I never expected to be looking forward to new Stargate next month.

I think the books are great. If the franchise is healthy and has an active fan base, it’s a good sign. I’ve been reading all of the novels. I don’t care whether they are cannon or not. They’re entertaining for the most part and help fill the gap in lieu of movies and new television episodes. As for their impact on the DVD movies I really can’t see that these have any negative impact whatsoever. The books are published by Fandemonium which I don’t believe is affiliated with MGM. I’m sure they pay a hefty licensing fee. Also, I think… Read more »

Chances are that, even without an Atlantis movie, these books could be contradicted quick enough by the McKay/Woolsey SGU episode.

GateWorld folks:
the author of the Stargate Atlantis books is Melissa Scott.

Holly Scott is TOTALLY awesome, but she’s a different author who has not written Star Trek books and has not yet won a Campbell award.

Canon or not I think these books are great and add another dimension to the universe.

The fact remains that there may not be any more SGA movies, in which case other then references in SGU, anything in these books could for all intents and purposes be considered canon.

As one who has read the books previously, if you enjoy the characters, etc then I would highly recommend them. Granted a movie could come out and falsify the books but really . . who cares? It’s still more stargate ;)

Darren – it still says “Holly Scott” all over the article. The author is Melissa Scott (who is equally as awesome).

Wouldn’t a real SGA novel have to do a reset at the beginning of each chapter?

Odd, that. I fixed it, we had a server hiccup, and it’s now reverted. Fixed again!

I’ve bought and enjoyed most of the SGA books already published, so I will be buying these, too, when they become available. I just hope they make sure not to cross over with either SG1 or SGU because I won’t buy those.

Already preordered Homecoming on Amazon, can’t wait till it gets here, maybe in the first week of October… I’ll let you know how good it is.
Sadly it looks like we have to wait for the movie for a while, so I’ll take what I can get. And who knows, maybe if TPTB realizes that we are still interested in SGA in any form we can get, decides the movie worth the effort and the cost.

Wow bit of a smack in the face, they end the series and state oh there’ll be movies made instead but no all we get are books oh goody.

Hey some people like books and that’s fine but I think I speak for most people when I say either make this movie we were promised or bring the damn tv series back its was going good.

What a waste of a perfectly good show.

Can’t wait. Love tie-in novels. And since the chances of us getting an SGA movie equal zero, it’s great to see the series continue in a book format.

@katikatnik
My thoughts exactly. I’m pretty exicited about this actually.

I’m surprised how many of you believe another SG-1 or SGA movie will be made at this point. MGM is basically bankrupt, you have a better chance of winning the lottery twice.

I would never have thought that I would like the stargate novels, but after I read my first one (roswell) I cant get enough of them. They may not be “canon” but they are still approved by Brad Wright etc…

I think most sg1/sga novels are badly written (mostly because the characters are often written completely OUT of character). However, being desperate for new stories, I read them anyway.

Take my advice, you can always pretend you’re reading alternate universe stargate, or if you read a line that doesn’t fit, re-read the offending paragraph again without that line or edit the line in your head. Actually works pretty well ;-D