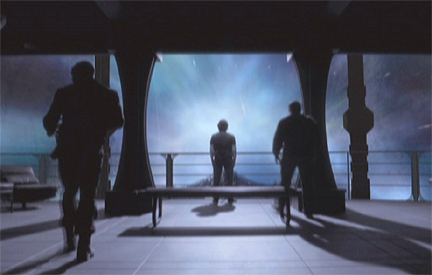 We’re just a little over ONE WEEK away from the big season premiere of Stargate Universe! If you’re the spoiler type, this one is just for you. Here are six things we know about the upcoming second season, which starts on a new night, Tuesday, September 28 on Syfy Channel.

We also have a new, cleaner copy of the Comic-Con trailer below. Enjoy it again one more time!  And be sure to tune in later this week for the return of the GateWorld Podcast, where we’ll look ahead to Season Two of SGU.

Beware of SPOILERS for the upcoming season in this post.  Most of what we know comes from what has been released (or hinted at) publicly by the cast, crew, and network — but if you’d rather not know anything about the season ahead … well, why did you click on this headline? 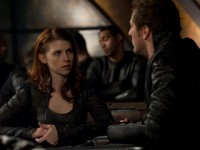 1. The Lucian Alliance Is Here To Stay

In last spring’s season finale this gang of leather-clad criminals from the Milky Way galaxy managed to gate onto Destiny and hold the crew hostage.  Led by the merciless Kiva, the Lucian Alliance hopes to take control of the ship and unlock its secrets for themselves.  In addition to Varro (actor Mike Dopud, who appeared in the last three episodes of Season One) as a recurring character, look for two more recurring faces among the Alliance: Simeon (Robert Knepper), a conniving soldier in whom Rush may have met his match, and Ginn (Julie McNiven), a young, female scientist.

The big question is just how (or whether) our crew can coexist with an enemy who stormed the ship and killed people they knew and loved.  Who will control the ship?  Will the group that’s not in power have a share of food, water, and medical attention?  Will they cooperate on missions?  Will they take orders from whichever group is in control? 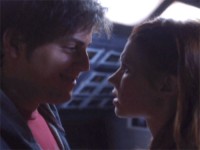 In addition to the growth of established relationships, such as Matt and Chloe, bringing new blood onto the ship means new possibilities for romance.  Eli will begin a relationship with Ginn, a fellow science nerd who takes a liking to him (as seen in the new Syfy trailer).  The lovely Dr. Amanda Perry (actress Kathleen Munroe, first seen in “Sabotage”) will make another visit (the trailer shows a kiss between her and Nicholas Rush).  And T.J. will also reportedly find a new shoulder to lean on.  … After watching the season finale, our bets are on the muscle-bound yet sensitive Alliance operative, Varro. 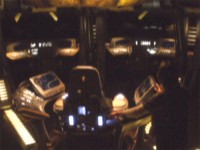 … very early in the season, and he won’t tell anyone — at least at first.  In the trailer Rush appears to still be seeing visions of his late wife, Gloria, who appeared to him in a lucid dream while he was plugged into the ship’s chair interface (“Human”).  Is she a manifestation of his subconscious, a sign of a mental break, or perhaps the ship herself seeking to communicate?

Rush finds the bridge and, Gloria suggests, the key to unlocking Destiny‘s control systems.  In the second episode of the season he’ll decide to deliberately alter the ship’s course, taking them to a planet where the Stargate has been locked out of Destiny‘s reach.  Rush decides to keep it to himself that he now can control the ship … and when the others do find out, he will be clearly holding all the cards when it comes to Destiny.

NEXT: Transformation, Cooperation, and Imagination

Overall I’m liking what I just read about the new season…the story sounds alot more interesting than last season. Although the love story stuff made me cringe. I’m glad to hear the crew is going to come together and start to get along with one another instead of tearing each other apart and that they finally have a mission other than getting home. I sure wish they had made the show this interesting in season one. Ratings wise, I hope its not too little, too late. Hopefully, the show will be good enough this season to win back some of… Read more »

I’m looking forward to SGU being back on. I was not too crazy about season 1 either, but when Chloe and Rush experenced the aliens, it kinda made it more interesting for me. Like the SG1 & Atlantis. From the trailer this season should be full of action and suspense. Can’t wait for next Tuesday!

Just about everything mentioned and heard here or elsewhere about Season 2 sounds pretty exciting. I wish, however, that somehow Eli and Chloe might have a romance going … but who knows.

I think Stargate is a wonderful show but Universe is just a painful and a depressing show to watch. Sometimes “realism” is best left to the nightly news….bring back Atlantis please..please.

I always thought Chloe’s knowledge of the alien script may have been knowledge cross-pollination from when they read her mind, similar to Rush knowing something about the blue aliens. Not sure though, I may have that wrong. I CANNOT wait until the 28th!

Wow!! Looks like season 2 is really starting to pick up! It looks like it’s going to have the familiarity that we know from Stargate, but it’s got it’s own flair! Every time I see that trailer I get chills!! I can’t wait for the 28th just 7 more days!!!

Sounds very promising! Looks like Season 2.0 will be miles better than Season 1.0!

“We may not ever get home, but being here is really, really cool. So let’s stop all this bickering and start trying to work together.” Robert C. Cooper

Finally! … and it will only have taken them, what, about a year? *laughs* Well, better late than never, I guess.
Also, kudos to Robert C. Cooper for calling it bickering… as opposed to, you know, “gritty, realistic differences of opinion” or “powerstruggle” or something ;o). I’m starting to look forward to S2.

well good trailer look at 0.20 seconds and you see the new alien race also how long until you think some nut job will bring back the replicators as they have beeen in every show so far

Marty, McKay and Woosley make an appearance in the later part of Season 2, so, until MGM starts making more Stargate STV movies, that’s the best we can get right now.

Does Kate Becket know about the “Budding Young Love”?