GateWorld: Story wise, let’s talk about Season Two. What were some of the high and low points for you? What are you proud of?

Martin Wood: Well, I’m proud of Season Two. I’m very proud of Season Two. Originally I was supposed to direct “Pavor Nocturnis,” and I think the biggest problem I had with last year was the schedule had to change and it had to change because we couldn’t get Tesla (Jonathon Young) for the episode we needed him for, because of his availability. So we had to move the position of “Pavor Nocturnis,” so I didn’t get to direct it. I think one of the nice things about running your own show is you can say, “I’d like to do this kind of show.”

GW: Is that essentially the equivalent of the bottle show for you guys here, or not?

MW: It was. We called it a bottle show. I did it in five days. I shot the entire episode in five days as opposed to the seven we usually shoot and spent the entire time in the water. It was challenging and hard for Robin [Dunne] and Amanda. That kind of show — like “Requiem,” like “Kush” — it’s in two people dealing with a very small space. There were no stunt people in “Next Tuesday.” That was all Robin and all Amanda. When you get through it, you look at it and go “Oh my god, how did none of us die in that pool?” because it really was … we were working our butts off, 13 hours a day trying to get it done in five days. 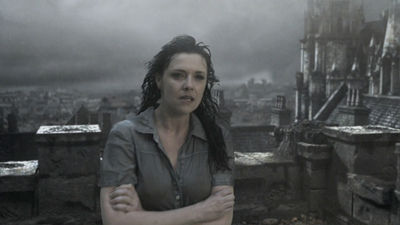 Both Tapping and Wood singled out ''Pavor Nocturnis,'' with Wood regretting he didn't direct it -- and Tapping describing it as ''some of the scariest work I've ever done.''

And in and out of the helicopter, the physical toll it takes on you to do that. Amanda didn’t flinch, didn’t blink. They didn’t slap me on the back and say, “Hey, this is great!” but they were really good about everything they did in that the thing was so precise. At the end of it I showed them the cut, and they all went, “Oh, it was worth it.” I didn’t hear that til they actually saw the cut, though. That was a challenging show.

I think that, again, trying to make 12 and 13 as big as we could was a challenge. When the low point of your season becomes, “Damn, I didn’t get to direct that show I wanted to,” it’s a pretty good season. I think sometimes what ends up happening is you end up getting into a situation where your back is to the wall on something you have to compromise for it. And those are always the situations where you really regret having to compromise. There wasn’t a lot of that last year. In the season, there wasn’t a lot.

There were a couple of shows that, given my choice, I would shelve them. No, not shelve them — not take them off the schedule. I would rather have taken the time and done something else with that time. But that happens all the time, because you’re experimenting.

GW: How about you, Amanda? What were you proud of in Season Two?

Amanda Tapping: I would say “Veritas” for me because it was such a huge challenge, and I felt like it came out really well. I was really proud of it. “Next Tuesday” was incredibly difficult but really, I think, a lot of fun. “Pavor Nocturnis” I think was an amazing episode for the show, but also some of the scariest work I’ve ever done. The most scared I’ve ever been on a set was doing “Pavor.”

And I think our final two-parter, “Kali,” was some of the best television I’ve ever seen. Martin did a phenomenal job.

GW: I suppose it doesn’t have to be said that fans miss the character of Ashley. For the record, would either of you like to discuss what brought about the apparent demise of the character?

MW: Well, here’s what happens. Sometimes when you get into a show and you have this brilliant idea of how you’re going to do the show, then you put the show into an entire form of a season. And then you look at it and say, “What are the strong points and what are the weak points?” And one of the weak points was we had a character that we weren’t doing enough with. And one of the reasons we weren’t doing enough with them was because we couldn’t see the arc for that character.

GW: How she was going to grow?

MW: Yeah, and we missed a big chunk of time with her, which was getting used to growing up in the Sanctuary. So we could go back and look at that. We could do a lot of those kinds of episodes, but where was she going to go? She was a mini-Magnus, you know, and how was she different from a mini Magnus? We spent a lot of time talking about what it was going to be with her. And then we thought the interesting part about this was “she goes to the other side.” It’s a very dynamic character move.

I think that we were getting pressure from the network to make something shift. They said, “This is good, could be greater. What are you going to do with it?” We looked at it and thought, “OK, well …”

I’ve said this in a hundred interviews before, a million interviews. I say it in every interview I do, and I’m going to say it in this one, too. I really believe that in order to put jeopardy into a show that you have to get rid of major characters. As much as it bothers everybody, as much as they miss characters, they want the familiarity of having normal characters on all the time. What happens is if you take someone who is as integral to your show as Ashley was and she can be blown up, she can be ostensibly gotten rid of, [then] every day your characters are now in real jeopardy. 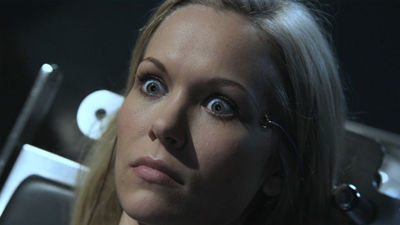 While Wood stands by the decision to kill off the character of Ashley, he wishes the introduction of Kate Freelander had been ''gentler.''

GW: I personally love the fact that it stuck. I was waiting for something to happen. I figured there may be a couple episodes and then Magnus finds a way to bring her back. And it just didn’t happen.

MW: No. And we’ve talked about it before. We’ve talked about where it ends up and if we’re going to bring her back for an episode or two, or what would happen. And as much pressure as were getting — this is an interesting thing — as much pressure as were getting on the Net about bringing Ashley back, it really isn’t born out in the market research. That’s the difference.

When you are looking at — and we do, we spend a lot of time sort of looking at what’s happening on the Net. I learned during Stargate to take it with a grain of salt because you have a very loud minority that will spend the time on the Net saying, “This is the way that the world feels.” But until you actually see the market research come back, that is a much broader net. So the broader net that was cast to sort of see what the reaction was — a lot of people thought the same way [as me]. That it was a really good move to do something like that, because, “Oh man, if they could get rid of her, then they really could get rid of someone else.” So that stuck.

MW: And when you do that the audience automatically goes, “Oh no, you’re trying to ‘Jonas Quinn’ us, and you’re just trying to fill a hole.” And honestly, that’s not what our intention was. It was to bring in somebody that could be another element of our team and not to fill the hole in Magnus’ heart, not to do anything like that. It was to keep that stuff alive.

I think we could have done it in a way that was a little more gentler on the audience, and I think all of us could agree with that — that it could have been gentler on the audience. I think, too, that Kate’s voice took us a bit of time to find. When you watch [episodes] 12 and 13, you find that Kate’s back and we may have found her voice a bit better.

GW: I appreciate the fact — I know that you were talking about Ashley kind of being the mini-Magnus, but she still is a rebellious daughter, so there was an “X factor” there. But with Kate, that X factor is there times ten. Just having that extra playability to not know where a character is going to go.

MW: Yes, and its very much played out in the first couple of episodes this year, where we got somebody who just does not fit the mold very well but brings something to the Sanctuary that we could not have gotten from somebody who was on the inside.

NEXT: Michael Shanks, and the possibility of more Stargate