GateWorld: Michael [Shanks] and Paul [McGillion] from the old Stargate days did guest spots last year. Was it fun having some old pals around playing on this new playground? Paul did the original webisodes, but for Michael it was brand new.

Amanda Tapping: Oh, it was so great, so great! I mean, Paul was in our webisodes, so it was great to have him back. And Michael — that was a highlight for me. It just felt so comfortable and so right. He’s such a good actor. We really wanted to bring him back but we wanted to do it where it wasn’t “The Sam and Daniel Show.” We wanted to make sure there was separation. In fact, we don’t have a lot of scenes together. But I would love to act with him again.

Martin Wood: Yeah! Getting Michael here was — I get to see Michael when we’re not working. I get to see Michael pretty much every day. We run into each other because our kids go to the same school. So we sort of drop our girls off and spend some time talking about where he’s at, what I’m doing and what he’s doing. And when this came up it was, “Hey, wanna do one of these?”

And we decided — and this harkens back to what Amanda said — we didn’t want to do Daniel and Carter. I don’t want to do that. It has to be something different. Michael was very adamant about that, too. They’re both very conscious of the fact that as much as the audience would like to see Carter and Daniel back together and in those roles … Magnus isn’t that person. So we needed to bring Michael back in as a character who wasn’t that, either.

There is still that … I mean when you first see him come around that corner, there is a look in their faces that was not forced by either one of them. They love working together and would loved to have more scenes, but again that would have brought back the sort of Sam and Daniel [dynamic].

GW: Stay true to the story. 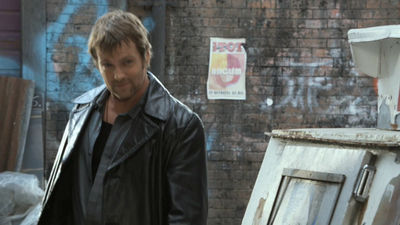 Several Stargate alumni have popped up in Sanctuary, including both Paul McGillion and Michael Shanks (above) in Season Two.

MW: Yeah. I think that we avoided the “Sam and Daniel” feeling of it really well, and still got the audience what they wanted, which was to see Michael there. We’d like to be able to bring him back and do something else with him at some point, and Michael is amiable to it.

He’s one of those characters that as soon as he came out the day he got there, I said, “Oh man, it just feels so good to get back with the Stargate people that I’ve spent so much of my life with.” Just dealing with some of the people that you’ve dealt with before, and a long-term relationship. It’s always really nice to have those days.

GW: Amanda, we got to see you again briefly in the Stargate Universe finale for Season One. If you keep being asked to appear, will you? Or do you kind of feel like you’re getting to a point now where with everything else going on and Sanctuary taking off the way that it is, that maybe it’s time to stop?

AT: No. Stargate is … I would never let that character go. She’s too great a character. Ultimately, that’s what it comes down to. And they’re family, so if they ask me then sure, I’d be there. But I think they’ve spread their own wings. I don’t think they need us.

GW: The third movie — it’s kind of stuck in a bit of development hell right now between the DVD market and MGM’s internal issues.

GW: Do you think it will happen or do you think time is running out on getting everybody back together or even the desire to carry forward with it?

AT: I’d do it. We had so much fun doing Continuum and Ark of Truth that I would do it, time permitting. But I think the window is closing, that’s for sure. That’s what it feels like. Had we shot it this past winter, that would have been a different thing. But I don’t know. Never say never.

GW: What changes do you have in store for Season Three of Sanctuary? Any teasers?

MW: The big arc for this season is going to take us to a place that has not been seen on television before. We are moving well beyond the walls of the Sanctuary. Where as we sort of showed the global Sanctuary network [in Season Two], this goes well beyond that and into a place where we meet a very, very cool character from history that comes back to scare the s*** out of us all, and is an old adversary of Magnus’ from the days of The Five.

We’re going back to the days of The Five for one episode. Just the original five. So I’m hoping that we get to see Watson again — yeah, Peter Wingfield — and Nigel Griffin, the invisible man. Getting back into it. There’s some good scary stuff coming up. I think that’s the biggest thing that’s going to happen this year is that we have an arc that will take us to a place we’ve never been before.

GW: Amanda, how do you feel about some of the things like the online auctions that are selling props and pieces that won’t be able to be used again? Is there a sadness there?

GW: Not so much that it’s going to the fans because they’re the ones who are going to appreciate and love it the most, but just that they won’t be used in productions again.

AT: It’s a bit weird. It’s a bit like letting go. Like, I’m teaching Olivia how to clean out her toy box and donate to charity, you know? It sort of feels like that. “But I love this teddy bear!” “But you don’t use it anymore.” “But I love it!” That’s what it feels like.

Tapping made it very clear -- even with Sanctuary's growing popularity -- if Stargate calls, she'll be there.

GW: A last question to both of you. Is there any message for your fans you want to get out there?

AT: I have to say, and I’ve said it before, the fans have always been really supportive of me. I’ve never once not, I hope not, recognized their contribution to my success so I’m always forever grateful. And with Sanctuary For Kids launching and the money that we raised is entirely by fan support and fan run initiatives — I just can’t say enough.

I was giving an interview and somebody said, “What is it about sci-fi fans?” And I don’t know. They are just a unique and incredibly socially connected group of people with a real conscience that I don’t think you see in other genres. So I’m always grateful to the fans.

MW: There’s a group of fans that … I love this group of women. I think they’re called the “WooHoos” or something like that.

MW: They sent me this DVD that was this beautiful tribute and I just, I get choked up whenever I see it. [GateWorld Forum member] Jumble is sort of the woman who spearheads this thing and is an incredible fan. And you know what happens as a director? You’re not expecting fans. You don’t expect that people understand your work because it’s not yours. They get to see the stuff in front. But when somebody watches you that much, they like to do a dedication to you. Like this group of women does. I get really choked up by it because I never seek out fans.

I love to talk to fans. I love to be around fans. I love to answer questions because fans are, to me, our life blood in a very physical sense. It’s not like you see numbers if you get to meet these people. Conventions are my favorite thing to do because during those conventions you get to sit down and have a one-on-one with the people who honestly spend time out of their life watching you. You go, “Wow, that’s cool!” As an actor, I think I would handle it completely differently then I do as a director. Because to a director it’s very humbling to realize that every move you make is being watched by somebody.

The other thing is that nobody is watching you the way that a director watches an actor. An actor may go, “Well, there’s a director;” but a director never goes, “Well, hold on there, star.” You don’t get that. So when you get an honest reaction from somebody that you don’t normally get as a television director, its humbling. And that’s how I feel about fans. Every time I meet them I’m very grateful.

And I know it sounds shlocky to say this, but especially this group that sends me birthday wishes, these things where I just go, “Wow, I can’t believe people care that much about a director of a show.”

That would be the message I send out. Thank you. And Amanda Tapping is awesome.

AT: Yes, thank you! [Laughter]