Sanctuary for Kids, the charity Stargate‘s own Amanda Tapping co-founded last November, has once again proven that sci-fi fans are not only a very loyal but also an extremely giving group! As reported last August by GateWorld, the first-ever Sanctuary Experience convention raised over $90,000, exceeding the charity’s one year goal in just eight months.

Now the group continues to raise the bar for television shows attached to charities with their latest online auctions that began October 21 and will run on eBay until October 31 (4 p.m. Pacific).

Jill Bodie, co-founder of Sanctuary for Kids (along with Tapping and executive producer Damian Kindler), said that they were overwhelmed by the response they received from the convention but have more ways for fans to help support the charity. “The online auctions are another way we can bring fans from all around the world together for a common cause,” she says. “And this auction has some new items that we think are going create a lot of excitement.” 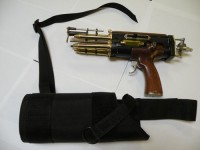 There are a few props from Sanctuary that have been donated by The Beedie Group, such as the Sonic Stunner featured in three Season Two episodes, as well as two costumes from the original webisodes — one worn by Helen Magnus (Tapping). However, the item that is most likely to get fans salivating would have to be a Skype chat with Sanctuary executive producers (and Stargate alums) Amanda Tapping, Damian Kindler, and Martin Wood!

Bidding had already reached $555 Canadian within just 24 hours of the auction’s start.

Sanctuary for Kids has already raised an astounding $178,000 and the numbers continue to grow with this latest online auction. “We strongly believe this is our responsibility,” Tapping said of their continued efforts. “And our fans have reacted in such generous ways. We feel empowered by their response to do more.”

Through the continued hard work of the Sanctuary for Kids crew and the generosity of fans, the charity has been able to do some amazing things for children all around the world. They have reunited seven sets of sisters who had been sold due to poverty as well as donated money to Save the Children in Haiti. If you would like more information on how to get involved with Sanctuary for Kids, you can check out their website at SanctuaryForKids.org.

Marie Cain is a GateWorld contributor.

I think they did…..buy hopefully it went to producing stargate…and not to the dept…..
Good idea from Sanctuary! They could have made profit of this but instead its going to Charity! They should expand to include more Sci fi shows

maybe this way Legend of the seeker could had been save…

I am sure there was plenty artifacts from Richard that people would had been interested.

Im glad to hear that they are doing a charity but im always concerned when I hear about props being auctioned off, esspessially from an on going show (even if there from previous seasons).